So here’s the tale:

We were driving along the interstate at 65 mph, about 100 feet behind a Ford F-150 pickup, when without any warning, one of the huge boxes the guy was hauling in his truck bed was catapulted into the air by the wind. In less than a second, a 3′ by 4′  furniture box (I was told it had a couple of chairs in it) was coming directly at us. At 65 mph.

Thanks to the Thriller’s fast reflexes (and the fact he did not freak and just swerve over lanes of traffic as a knee-jerk reactionary move, which is what I fear I might have done) and excellent driving skills, he was able to maneuver us out of the way enough so the box didn’t hit us square in the windshield, but instead on the passenger side of the front end, where it deflected off and tumbled over and over and over on the road behind us, causing other people to slam on their brakes. But at least they had another couple seconds’ warning before they had to react, which was more than the Thriller got.

We pulled off onto the stripes of an exit ramp — you know, that triangular place in between where the interstate continues and the ramp veers off? — as traffic kept whizzing by, amazingly, unnervingly close. The guy got out of his truck and looked pretty shaken. He apologized to us and got on his cell phone and called the law. They were there within five minutes, at which time one of them put on a yellow vest and went off to retrieve the box that was still being bumped around and grazed, although traffic had slowed a bit by that time. A police SUV arrived a few minutes later and stopped traffic altogether while the mess was cleared away.

It’s the game of inches that had me shaken up, you know? A few inches higher, and the box would have plowed right into the windshield. A bigtime direct hit on the driver’s side could have deployed the air bags, blinding the Thriller as he drove at high speed. It could have gone all kinds of wrong, is what I’m saying. And it didn’t.

But that doesn’t mean there aren’t consequences. The HP told us we could expect a repair bill that could reach $1000. One of the headlights was destroyed, and the hood is janked. The bumper is scratched up, and for some bizarre reason, the cruise control no longer works. Fortunately, the Ford guy’s insurance will have to pick up the tab, but that means giving up the F-mobile for several days. Fantastic.

Still, I’m delighted that nobody was hurt (or worse) in the whole incident. I was impressed by how the police took control of the situation and made sure the broken, battered box and its contents were cleared off the road before there was a *real* tragedy. But hey, ours was enough for me. I looked like this for awhile: 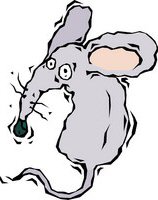 The Finkmobile didn’t fare too well, either: 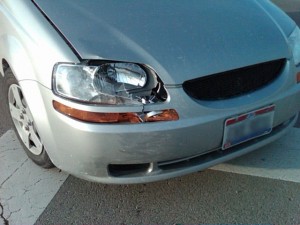 I’m just glad to be home in one piece.

YIKES how scary that must have been!!!! Try not to think too much about the what-ifs, it will just make your sleepless nights even more sleepless. Here’s to Da Triller and his having his wits about him!! *huggles* Too bad about the finkmobile tho…:(

It was scary bigtime, Suz! Definitely raising a glass to the Thriller — if I’d been driving, the results might have been quiiiiiiite different!!

OMG How scary! I am so glad you and the Thriller are okay. Poor little Finkmobile though.

Thanks, Stoney. We were shaken up a little, but all is well. Trying to get a loaner car to drive to school while the Finkmobile is in surgery.

Wait…how could I have been so silly & forgot to ask: …but how are the CHAIRS???

Haha…I think that after being hit several times (another guy ran over them, but M insists that he saw the man *aim* for the box), they’re pretty much toast! The driver of the truck told us that he allowed the furniture store staff pack the boxes in his truck bed (he’d just bought them …. ouch), and he didn’t check how secure they were.

That’s one of those mistakes (like the time when Seamus backed the boat into the water without first replacing the drain plug) that you only make once. Sheesh!

Sorry that you had to experience this, but I’m really, really glad that there was no physical injury to either of you. It sure increases the heart rate very quickly!

Yes it does! And speaking of driving — when’s your arrival date back up north? (Still owe you that mail)