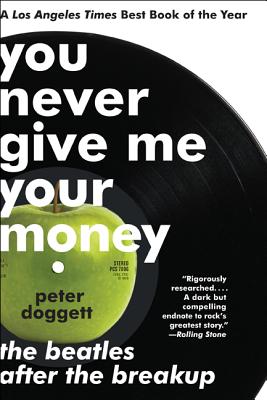 The Wizard of Oz was a shyster behind a curtain. There was no one by the name of Jack Dawson on the Titanic. Milli Vanilli were complete fakes. And post-1968, the Beatles were not friends. Indeed, Yoko Ono’s presence may have exacerbated the situation, but resentment, disappointment, retaliation and betrayal — mostly in the name of money — were what really slammed down the lid on the most game-changing act in popular music history.

Reading You Never Give Me Your Money was work. Sometimes, books are like that. I didn’t enjoy a single page, but I can tell you that the scales have fallen off (as they eventually must, when dealing with humans with big expectations, egos and fortunes), and if the depressing Let it Be documentary didn’t clue people in about what was really happening, they weren’t really willing to see the truth.

I wasn’t willing to see the truth. But there it is, in Peter Doggett’s painstakingly researched account of the ultimate demise of the Fabs. While some of it was rehash for me, there were some interesting revelations:

It’s no secret that the Beatles feuded with one another after their breakup. But this book reveals, in heartbreaking detail, the cracks in the individual armor of the Beatles as individual parts, which makes the demise of the whole much easier to understand, if not much more tragic.

Doggett is hardest on McCartney, although he pulls no punches on any of the four. Paul’s need for absolute control, John’s cruelty and neglectfulness, George’s infuriating, snobby stubbornness and Ringo’s descent into heroin and alcohol oblivion are spared no scrutiny. How they all made individual albums during this time is beyond me, although I can’t say that I’ve ever been truly impressed with any of their solo work. Would you put Band on the Run or Walls and Bridges on the same plane as Rubber Soul or Revolver? Hardly. That none of them produced nearly as compelling work individually as they did as a group is neither news nor debatable, in my mind.

When I started this book last month, I knew there’d be no fairy tale ending. After finishing, I think it’s a book I need to recover from; to process. There’s no shortage of sadness. To quote a favorite line from Immortal Beloved: “It is the sharpest blades that are most easily blunted, bent or broken.” Without making an inappropriate comparison with the great Beethoven, I think it can be said that these four fragile people were among the sharpest cultural blades of their time, and defined a new era in popular music. It’s especially tragic that they were eventually consumed by greed and corporate intrigue — the very things that appalled them most as they fought in the early days to establish their place in music history.

8 thoughts on “The comedy is over.”