Welp, Suzanne sure nailed it when she said we’d make up for the disappointment of Deadwood.

Two more national parks yesterday drove home the point that while there are many wonderful places overseas to visit, absolute grandeur and glorious beauty lie right here in our own country. We enjoyed both legend and history at Devil’s Tower National Monument, Wyoming, and at Little Bighorn National Monument in Montana 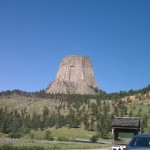 Another monument, another trail conquered! I swear, I never thought I’d equate “relaxing vacation” with “climb trails till you’re walking on your tongue.” But it was great for both of us to get out and walk the earth and breathe air while enjoying this fantastic setting. 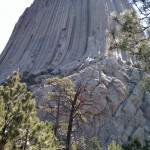 A good view of the bear's claw marks
The legend goes that seven Arapaho girls were fleeing from a large bear. They hid behind a rock, and prayed, “Rock, please protect us.” The rock then miraculously rose up into the sky, with the girls on it. Up, up and up it went. The bear tried to reach them; he clawed and clawed at the rock, until eventually, his claws broke and he fell down dead. The girls then ascended to the heavens, where they can still be found today, in the constellation called the Seven Sisters.

After Devil’s Tower, we drove through Crow Agency — sadly, a dying town — and saw the downside of life on an Indian reservation (assuming there’s an upside). Without going into a socioeconomic litany, suffice it to say that 135 years of disenfranchisement takes an unlovely toll on the humanity of any race. RtB fiend Will, whom I believe is Crow (correct me if I’m wrong, Will), could likely tell us stories his mother has shared with him over the years.

But back to the beauty.

Possibly the best storyteller I’ve ever heard told us the tale of the Battle of the Little Bighorn. He was a National Parks ranger (the Thriller, a former ranger himself, told me they’re called “interpretive” rangers), and with very few props and only his voice over a small microphone, he held a hundred people spellbound with the story of the ill-fated battle on that sweltering June day back in 1876.

There were no winners.

What impressed me the most — besides the absolute unspoiled beauty of the place — was the silence. Hundreds of people were there with us, but out on the memorial trail, there was quiet respect. We were quite moved by it. 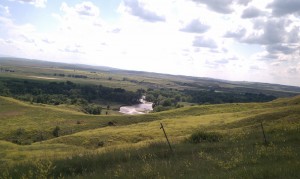 This photo shows an important part of the battlefield. On the left side of the river, in that thicket of trees, is where Major Marcus Reno and Captain Frederick Benteen holed up while the Cheyenne and Lakota made short work of George Custer’s regiment. Another warrior party later found them, flushed them out to the high ground, and did away with many of them as well. Too many on both sides died. It’s another one of those mythical battle tales whose grandiose story often overshadows the fact that brothers, dads and sons, on both sides, went out way too soon. 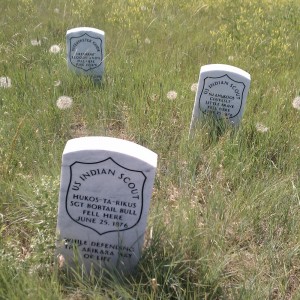 An amazing day. And we’re up at at ’em early this morning, headed for Yellowstone. Up and away!

Fantastic!!!!! And you will LOVE Yellowstone! I hope you are staying there for a couple of days. ?

That question mark was supposed to be a heart. It showed up here in this box but through the magic of internet it turned into a question mark.

We did love it! Oh MY. Too bad we only had one day. We definitely need to go back when we can stay more than 6 hours.

Chippewa Cree actually. Our reservation is actually in the northern part of the state and we have a Wikipedia page I just realized: http://en.wikipedia.org/wiki/Rocky_Boy_Indian_Reservation

But yeah, I remember when I was young and saw Little Big Horn the first time tearing up a bit. It’s all crazy.

Cree, not Crow! Sorry, Will. And we were really moved by the Little Bighorn story as well.