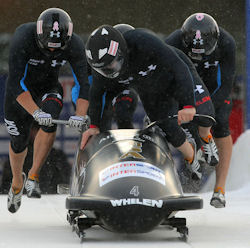 That’s what they called it at the bobsled/luge track. I understand it was given that name by gold medalist Steve Holcomb, who observed that athletes usually made it around Curve 13 with success only 50 percent of the time. (Guy has a great personal story to tell, also — you should read it.)

Speaking of Canada, it was their goal to “Own the Podium.” While they didn’t do that exactly, they did shine. They ended up with more gold medals than anyone else, which is cool for a host country to claim. Kind of bummed the US gave it up to them in hockey, but that’s sport for ya. Note to Apolo Ohno: holding up seven fingers after your race makes your fellow competitors wish you’d take a header into the wall, not to mention it just reinforces the stereotype of Americans being arrogant jerks. A little integrity and humility, please, for the sake of your country…

But enough of that. Back to me.

I have a 50/50 curve of my own coming up, only unsuccessfully navigating it is not an option. Why are we so demanding of ourselves? Is it our upbringing, as was alluded to in yesterday’s yammering? Fear of failure? Truth be told, it’s not *my* 50/50 as much as it is my students’. But as they say, the captain always goes down with the ship. If they miss some mark, I will bear it.

Still, as with the bobsled athletes, dedicated training has to pay off at some point. I have told my students on several occasions that they are living my vicarious dream: to be onstage again. My hope is that they see that for many of them, the opportunity they enjoy right now is temporary, as none of them will be musical theater majors, and almost all will not perform in musicals past high school. So, making the most of it while they have it is crucial.

And that realization will hopefully help them through the 50/50 curves.