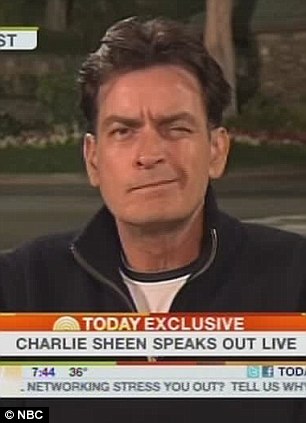 If Charlie Sheen tested negative for drugs after his whacked-out interview with ABC News the other day, then he is far more dangerous than anyone previously thought. And this is the same man who told NBC News that he’s bent on getting his twin sons back where they belong, and that he definitely intends it to be soon (with a wink and a blown kiss to the boys at the end of this interview).

His nutball quotes and trippy non sequiturs have gone viral. If they weren’t caused by drugs, then what? Does the media think this is funny? The man’s lost the one and only explanation that could remotely justify the sensational “fire-breathing fists” and tedious “winning” comments. Being strung out on “seven gram rocks” will at least give a partial reason for the insanity. Now, the only reason is, well, insanity.

Of course, I don’t know all the details from all sides of this circus, so I won’t comment on what I think needs to be done. I’m just saying that Chuckles isn’t doing his case to get his children back one iota of good, boasting to all and sundry that he basically just fell off the cuckoo train.

And we think we have problems.

Oh, and speaking of craziness: rehearsal went pretty well last night. We’ll see what the other shoe decides to do.