Yep, fiends — it froze over. The Thriller and I went out and bought a Wii system for the grandsons.

I originally swore to never have one in the house, because I knew the two of us could be too easily drawn in by the blinking lights and other shiny things that video games use to Svengali and Rasputinize the unsuspecting, innocent citizenry. But there we were, in the Game Stop, buying the Wii and three games (Madden ’13 and Bigfoot for the boys; and Dance Dance Revolution for Grammie — please don’t picture it in your mind).

Actually, the shopping trip was fun. We took the boys with us so they could pick out their games. It was a true kid-in-the-candy-shop experience (for the Thriller as well). When we got home, they took to unpackin’ and settin’ up: 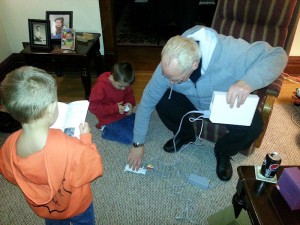 Jake was on batteries, the Thriller assembled hardware, and Justin read the instructions.

After a few stops and starts, the first game was underway: 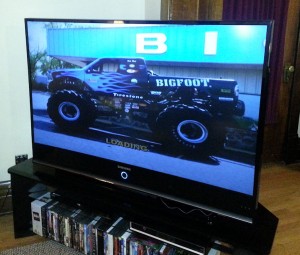 They played and played. Then they put in the Madden game, and the three of them laughed as the Cleveland Browns were penalized for delay of game over and over and over because Jake couldn’t get the play selection made fast enough, HA. And art imitates life…

Happy Sumday! Before getting back to work this evening, I’m finally going to see Les Mis at the matinee with my cinementor, Tom Hanks. Reviewin’s brewin’.

2 thoughts on “Temperature in Hades: 31”