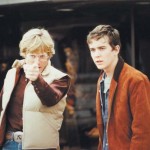 I remember having a crush on Timothy Hutton (pictured here being directed by Robert Redford) back in 1980 when I bawled through the movie Ordinary People. It’s a goody, you should rent it.

He was married to Debra Winger (of Urban Cowboy fame — I think I’m the only person on the planet who hated that movie) for awhile, too. He’s also a spitting image of his daddy, the late Jim Hutton, an actor my dad really liked. Anyway, he’s doing a new series for TNT entitled Leverage, premiering on 9 December. According to the press release:

Hutton plays former insurance investigator Nate Ford, a once-loyal corporate employee who recovered millions of dollars in stolen goods for his employer. After the employer denied his son’s insurance claims and allowed the boy to die, Ford realized he could no longer work for the company.

Out of work and unable to get past his grief, Ford is hired by an aeronautics executive to recover airplane designs the executive claims were stolen by a rival. He assembles four highly skilled team members: Parker (Beth Riesgraf), an expert thief; Alec Hardison (Aldis Hodge), a specialist in Internet and computer fraud; Eliot Spencer (Christian Kane), a high-octane “retrieval specialist” who can take out a gang of henchmen without breaking a sweat; and Sophie Devereaux (Gina Bellman), a grifter who could win awards for her acting skills during difficult scams.

Sounds pretty good, and Timothy still looks presentable, if not handsome for 49. Starting next month, Leverage is on Sundays at 10 p.m.