Happy Sunday — Hey, here’s something funny to start your day: The Browns are on Monday Night Football tomorrow.

So the Thriller went out last night and picked up some of Jakey’s presents. (Clicky) 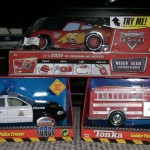 Just as I predicted…Tonka stuff (recommended for ages 3+), similar to what the Thriller used to play with back in 1955. I think it’s fabulous, though. He’ll love them. Jakey, I mean. And did you know that “Tonka” means “great” in the Sioux language? Well, now you do.

Sam, I will check out the Mozart thing, thanks! And Michael…read your email about the drumset idea…

OK, a rant for today. Unfunded mandates are the bane of public education. And sometimes, they’re just dumb.

First let me say that I feel awful for the family of little Jarod Bennett. I cannot imagine in my most ghastly nightmares the horror of losing a child. As a result of Jarod’s terrible accident at school (when a folded-up cafeteria table wobbled and fell on him, killing him), former Ohio governor Bob Taft signed into existence Jarod’s Law in 2005.

As a result of Jarod’s Law, we now have to fill out MSDS forms on everything in our classrooms. And I mean everything, including, but not limited to:

We (teachers & administrators) are further insulted by the law’s admonishments that:

Some have said that the law was necessary, because people are innately stupid and if there’s no law to remind them to use their brains, they won’t. Well, I submit that the mere existence of law does not necessarily make adherence a no-brainer. (Ya think??) I mean, come on. What happened to common sense? If you have sulfuric acid in your room, don’t leave it out on the counter top when you go to lunch. Do they not teach this in chemistry classes?

It’s truly sad that people will put $10 in petty cash in a locked safe, but leave dangerous folded-up cafeteria tables out where elementary school kids can play on them. **Side note here: why are kids playing on folded-up cafeteria tables in the first place? Why are they unsupervised in the cafeteria?** I guess that’s the reality behind Jarod’s Law. So it’s come to this. We have to legislate basic cognitive functions. Yark…I need a drink.

Speaking of chemicals: the chemistry teacher at my high school told me that his MSDS forms folder is over 300 pages long. And what does updating one’s MSDS folder entail? Looking up (and many times, not finding) the exact name brand of your bottle of rubbing alcohol or white board cleaner, printing out the MSDS safety sheet on it, punching a hole in it, and putting it in a plastic binder so you can display it when the Jarod’s Law people come to inspect your room twice a year.

So what am I doing today? The Thriller and I are going to my classroom to make sure everything’s in order for tomorrow’s inspection. We’re cleaning out cabinets and storage spaces, and I am removing every ounce of hand lotion, hand sanitizer and Windex that I ever stored anywhere in my room. I have my generic MSDS forms already in their display folder; I will play the good little soldier and do what I’m told tomorrow for when Big Brother comes to inspect.

And did I mention Jarod’s Law is yet another unfunded mandate by the state government? (Translation: the state legislature makes up new crap, and the schools get to pay for it. No wonder nobody will ever pass another levy.) 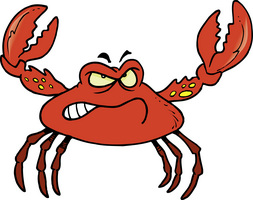 And that’s all for today, because, well, I have to get ready to go to school. Nice. I know, I’m crabby. But after tomorrow night, you’ll see a new me, promise!