Yep, I’m all excited about the new phone. I must admit it’s a little frustrating — even for a self-proclaimed geek like myself who likes to think there isn’t a single piece of software tough enough to stump me — to struggle with a device like this. No matter, though. I spent some time on it yesterday, and I’m a lot farther along than I was. I will get it, though. Mark me.

So yeah, my BlackBerry Storm is pretty cool, I must say. However, as with any new phone, people rush to judge it without really playing with it long enough. I read a review in PC Magazine where the journalist didn’t even know the most basic functions that can be executed by simply reading the owner’s manual. Anyway. Here’s my Storm, all prettied up with a violin background: 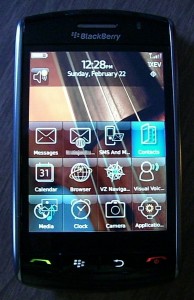 Getting used to a phone with no keypad has been interesting. It’s just a different set of steps you have to go through. 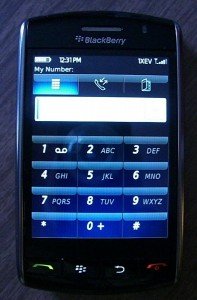 I really like the text messaging and email setup, though. That’s probably my favorite feature. (And the web access doesn’t bite, either.) Turning the phone horizontally reveals a full text keyboard, which I really like. 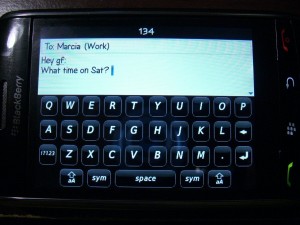 Lots of upsides to this phone make it worth using for me; namely, the text-messaging and email. Amazing, both. There are a few annoying disadvantages, however.

So, not 100% intuitive, but that’s OK with me. I still love it. And this wasn’t exactly a Wired-worthy review of the Storm, but hey, it’s 5:54. Have a great Monday, my fiends. Today we start Year Two.