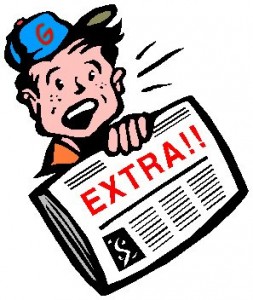 Today’s news: Stop the world. I wanna get off. Wasn’t that a Broadway musical? I’m too lazy to find out.

But seriously, hold up.  Lots to discuss today.

1. Last night, we had dinner-and-movie evening (the first one in a very long time) with Bob & Kay. We watched the first part of a Ken Burns documentary on the Dust Bowl. Incredible. If you have Netflix streaming or Amazon Instant Video (it’s free for Prime members), you must watch it. Here’s the trailer:

It seriously made me ashamed to complain about long lines at the grocery checkout or sluggish internet downloads.

2. The extra snow days thing passed the Ohio House. Now it goes to the Senate. If it passes there, the governor (whose proposal it was in the first place) will sign it into law. But now there’s talk about not paying teachers for snow days, as well as puffed-up politicians piffling on about the allotted extra days causing students to “miss out on educational opportunities” — as if they (the dirty pols) are more concerned about kids than appearing to take a hard stance in their districts with regard to those filthy, money-grubbing, overpaid teachers in order to bolster their chances for reelection. Bite me.

3. Remy, while still afraid of his shadow (and everyone else’s shadow as well) is making progress: He will now go to visit the Thriller in his office while I am home. Although right now, he’s in his standard hideout, at my feet, under my desk.

4. Well, sorry Arizona (and awesome RtB fiend David, who is likely ashamed as well), but after the ridiculous anti-gay vote, I’d say if I were an Arizona resident, I’d eat at Rocco’s. Like, daily.

5. I know I’m going to Hades for being a grown woman and laughing at this, but if you get it, you might smile, too. Haha.

6. I did a lesson with all of my choirs on the 50th anniversary of the Beatles’ arrival in the US. The range of questions across age groups was, at times, comical. From a high school junior: What was the main reason the Beatles broke up? From a 10-year-old 5th grader: Did anyone video John Lennon getting shot?

Have a great weekend, fiends — I’m off to get my tap shoes and dance the afternoon away.

4 thoughts on “Stop the presses”