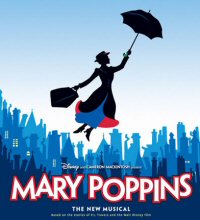 Yes, I am going to Playhouse Square in Cleveland tomorrow to see the Broadway touring production of Mary Poppins. My fiends Stoney, Wendell (and her fam), Bar-Jai and G will be joining me.

Not sure I’m remembering this correctly, since I haven’t seen the movie in years, but here goes. Remember the scene in the 1964 film, in which little Michael refuses to hand over his tuppence (two pence) as a savings deposit, preferring instead to use it to feed the birds? Then the bank president — a grumpy old curmudgeon played by Dick Van Dyke — tries to grab it from him, which eventually causes a run on the bank. Funny how a slapstick scene from a 45-year-old movie can take on a different meaning all these years later. Greedy banks that haven’t a care about customers’ wants or needs: who knew? Hmm.

Anyway, the show is certain to be *big* if nothing else. Disney and Cameron Mackintosh, are you kidding? I’ll probably experience sensory overload before the kids ever start with “The Perfect Nanny.” I hope I’m not offended by the singing (next to opera singers, Broadway belters are the absolute worst perps of the crime of Ten-Mile-Wide Vibrato). I hear the dance sequences are sensational, though.

Did you know that scholarly treatises actually exist regarding the inherent symbolism in the character of Mary Poppins? Check this out from one paper I read in part (even I don’t have that kind of time):

As Cheech & Chong were wont to say: heavy, man.

OK. The Thriller and I get Jakey all day today, yippy! Face and hair go into the shop for maintenance at 11, and after that…well, fiends, it’s summer vacation, so you know…quien sabe?