I’m not a fan of statistics as a field of study. Not only because of the math (actually, math is only a part of the stats picture), but because I struggle to find the key elements that combine to point a researcher to the desired statistical method for collecting and analyzing his or her data.

Was that ambiguous? Poorly stated? Yeah, I know. Let’s try this:

On my comprehensive exams coming up in April, I will be given two educational scenarios or problems, and two hours. My job is then to design a complete research proposal on each one. I will need to know what kind of research “lens” to use, and which of a dozen different tests will most accurately measure the data and facilitate the interpretation of my findings. This is all apparently an effort to test my synthesis abilities when it comes to the two basic divisions of research (qualitative and quantitative). 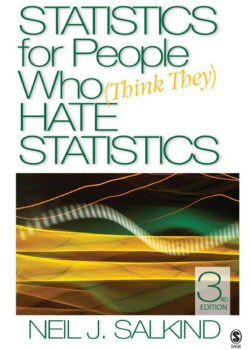 I know: this is boring, get to the point. Right.

The quantitative stuff is pretty scary to me, so I bought a book at the suggestion of some classmates. I started it last night, and I’m on chapter 3. It’s actually not too bad.

For instance, why didn’t my prof say in his lecture months ago that, simply, measures of central tendency are also called “averages,” and that they come in 3 flavors: mean, median and mode? How simple is that? But noooo…we’re doctoral students so we had to take the long way around and avoid such elementary statements that I would have understood immediately. Maybe that’s a bad example, but you get where I’m going with this.

When I read the reviews for Salkind’s book (“It really is easy to understand,” “This is the book that will finally open up statistics for you”), I thought, Yeah, yeah, right. But they haven’t met me.

Well, surprise surprise: actually, I do get it so far. So there is hope for the mathematically — and in some cases, logical-thinking — challenged. If you’re taking a stats class now, or you plan to in the future, I highly recommend the book.

In fact, I will save it for you and you can buy it from me. Such a deal.

Now, back to X bar equals sigma X over N. Cuz, you know, that’s how I roll.

Fink, waitin’ for the blizzard to get here (it’s started already…photos tomorrow for the Florida, Texas, or otherwise snowless people).

PS — Aw. I just read that the other Hager twin died. I didn’t even know the first one passed away.