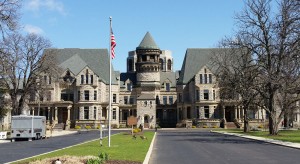 The Ohio State Reformatory opened for business to 150 convicts in September, 1896.

A while back, Groupon had a deal on tickets to tour the Ohio State Reformatory, the now-famous 19th-century prison where parts of movies such as The Shawshank Redemption, Air Force One and others were filmed. (A dozen TV shows and music videos have also been shot there.) We finally found a good date to go, so we drove all of 15 minutes to get there, yesterday morning.

I mentioned to a Facebook friend that I’ve lived nine miles away from this place for over four decades, but never visited until this weekend. Strange for sure, although the property wasn’t always a restored historical landmark. The dilapidated structure was closed in 1990, and inmates were transferred next door to the newly-finished Mansfield Correctional Institution, now referred to by locals as “Manci.”

Sitting and rotting for years, surely destined for the wrecking ball, the place was a huge eyesore in Richland County until a group of citizens formed the Mansfield Reformatory Preservation Society in 1995, and rallied to save it. The work is ongoing, funded by private donations and tour fees.

The place was designed in Germanic-Romanesque style in order to give prisoners hope of returning to a more noble and virtuous lifestyle after serving their sentences. Not sure how that all worked out, but it certainly must have had a dramatic impact on convicts upon first coming up the main access road. It looks more like a haunted castle than a correctional institution. Chamber of Horrors, yikes. At six stories high, the east wing is the largest freestanding steel cell block structure in the world.

Most unsettling — aside from the creepy historical vibe (and the silence, as we were first inside the building, and for the most part, alone in our wanderings) — was the sheer size of the cell blocks. How these men could have eked out any type of existence that wasn’t permanently scarring is beyond me. The hopelessness…all I could think about was the hopelessness of the inmates in these hellish surroundings. 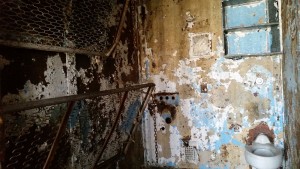 The warden, his family, and some lower administration were also housed on-site. The warden’s quarters take up a surprisingly large amount of space in the main house, spacious even by today’s standards.

Inmates attended chapel, and were allowed a library from which to glean edification of their brains and souls. Conversely, those who refused to be inspired or taught stood a better chance of ending up in the solitary confinement wing. Terrifying.

Being incarcerated is one of the most frightening things I can imagine. Being locked up in a place like the OSR? Unimaginable. Located just outside the windows of the old structure is the modern-day prison, although we were forbidden to take photos of the place. 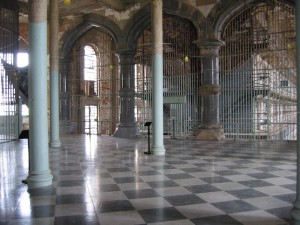 Nowadays, the newly-restored main guardroom is a place for receptions, meetings and other events that can further raise funds for the ongoing restoration. I read an article somewhere in my research this morning that quoted a Preservation Society member as saying the massive restoration was designed as a “100-year project.” I can easily imagine it taking that long to completely restore or renovate this massive structure.

And now…back to reality. Oy.