Yeah, that’s the Fink. Spelling is one of the 1.7 things in this world that comes easy to me. I won a spelling bee in the 8th grade; I thought it was the Academy Awards. My prize was a brand new paperback copy of The Andromeda Strain. It was the first real sci-fi novel I’d ever read (think an early version of Stephen King’s The Stand, but without the devil and the whole weirdness in Nebraska, and…well, maybe it’s totally different, so forget that) and I remember my ookiness at the crazy guy who drank Sterno. And he was completely immune to the virus. Bizarro.

Anyway, I love spelling, and I think it should be taught at *every* grade level, K-12. But that’s another whine for another week…

While waiting to leave for my gig last night (which went very well — one down, four to go), I stumbled upon the Oxford Dictionaries Spelling Challenge. Hmmm. Spelling challenge? Them’s fightin’ words. So I took it — eight times. Six of the eight ended in a perfect score; the others I blew by one error, misspelling plebeian and plebiscite. RATS.

Check this out, though. Here are the results of the six: 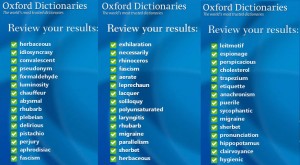 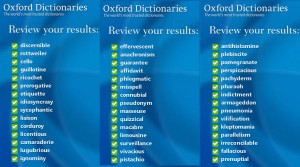 After only five or six times through it, I began to see repeated words. Huh? I mean, it helped me to get plebeian and plebiscite the second time around, but seriously? Over a million words in the English language, and you can come up with only a hundred to put on a “Fiendish”-ly difficult spelling test?

Ah, well. Whaddya want for free? Bigger problems await me today, anyhow — me and my NyQuil-addled brain. Totally hung over from it, but it sure helps me make it through the night.

The only thing better than last night’s Ohio State loss would be a Browns loss today. Yes, you read that right, and fellow football heads know why. I want them to lose out. Nothing can be gained by winning now, except maybe a little man-pride at beating the Patriots — which is not going to happen. I plan to enjoy the surreal experience whilst coughing my fool head off on the couch.

But you know what? The vanilla latte I just made was fantastic.