Still getting used to Mountain Time, yikes. I tried to stay awake watching a Twilight Zone marathon on SyFy, which helped some, but here I am at 4:40 a.m., wide awake. It’s all good, though. We are amazed at the beauty here.

Yesterday was the first “official” day of our Odyssey, vacation-wise. Up until 4 p.m. yesterday, we were either en route to family or just holing up for the night. I must say, South Dakota hits it out of the park. It’s gorgeous.

On the way into western SD, I noticed a sign at a rest stop. I said to the Thriller, “Hey, look at this. The sign says, ‘Watch for poisonous snakes.'” His answer: “Well sweety, this is the Old West.” I guess I hadn’t put two and two together. I got to looking at the map, and saw the town of Belle Fourche (pronounced “bell foosh”), and immediately thought of my nostalgic night a couple of weeks ago, watching John Wayne in The Cowboys from around 1969, in which he and a bunch of young boys were driving cattle to Belle Fourche. Yep, it’s the Old West all right. Some of the stops along the way: 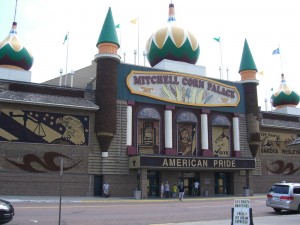 The Corn Palace, built at the turn of the 20th century in Mitchell, SD, was fun. The murals throughout the place (outside and in) are created with corn and other grains by local artists, and changed out each year. Quite impressive.

There’s really not much to it aside from concessions (“Corn-cessions,” as they call them), and a huge floor full of wares in their arena. But it was fun to read the history and peruse the shopping area.

Of course, we couldn’t go through South Dakota without stopping in Wall, at the world famous Wall Drug Store: completely kitschy and fun. We’re glad we took an hour to look around, although it would have taken much longer than that to see everything. 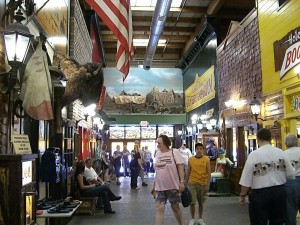 The complex reminded us of a huge flea market atmosphere, only with some really nice stuff. Still, the delightful tackiness prevails, as illustrated by the fact that no centimeter of space — on walls or anywhere else — goes to waste. Fun.

[OK, a spider just lowered itself on a string of web, right in front of my face. Now I don’t see it anywhere. I am officially heebie-jeebied. *shudder*]

Then it was on to Keystone. What an absolutely gorgeous place. And yes, you can see Washington and Jefferson’s faces from our deck, though I’m not sure how much justice photos can do. I used the zoom on my camera, but I’m not sure my little Casio does the trick very well. We’re about a mile and a half from the monument, so it looks tiny: 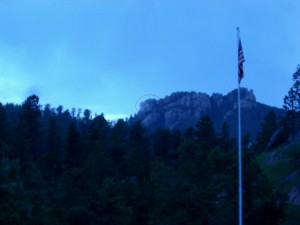 View from our deck

We took a drive into Keystone for dinner last night (which was six kinds of awesome), and walked the downtown area, which looks very much like an Old West mining town. Very cute. We bought some gifts and had dessert at the Fat Frog.

Today, we’re hitting Mt. Rushmore, of course, then probably spend some time in Deadwood this afternoon. Tonight’s open. Whatever we do, it’ll be at a leisurely pace, while we enjoy this amazing wilderness. Put in your souvenir orders!

Thanks for sharing your trip. Reading this blog created a walk down memory lane for me. A long time ago–I think it was 1985–we drove to Yellowstone and then made our way through the Grand Tetons, down the Snake River Valley and eventually into Salt Lake City. We saw Wall Drug Store, the Badlands, and Mt. Rushmore, but I don’t remember Belle Fourche. For some reason, we missed the Corn Palace too. When we were in S. Dakota there was also a huge Air Stream gathering. There were hundreds and hundreds of people with Air Stream RV trailers on mile… Read more »

Mt. Rushmore is definitely on my bucket list! Thanks for the pics, luv! We’re off on our great adventure tomorrow, and I’m tellin’ ya – it can’t come any too soon! I have a co-worker on the training team that is responsible for consumer products training for a lot of EU (France, Italy, Spain, German speaking countries). He lives in Barcelona. We’re having dinner with him on Thurs & then he’s taking Friday off to give us a special guided tour of Barcelona. I hope to be able to post some pics while on the cruise. Keep fingers crossed for… Read more »