Like today, for instance. While most everyone else goes back to work, I don’t. I like that. Actually, I am going to work, but not because I have to. Am I mental? 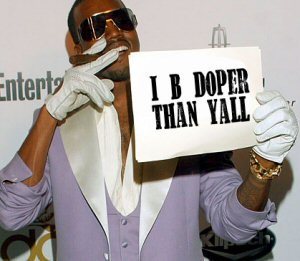 And sometimes, I must admit that I experience a bit of schadenfreude. Actually, I did this morning. Sorry, fiends: I have little tolerance for our boy Kanye West (sorry Kodye). For the record, I also hate the moronic South Park, but I gotta tell ya I laughed when I read that West got his comeuppance from the SP writers when they lampooned (read: lambasted) him on Wednesday’s episode for being completely and utterly out of touch, arrogant and narcissistic.

And honestly — “KanyeUniverseCity.com” ??? Who thought up that gem? Hmmm. Bet I know.

All right. In his defense, he appears to have taken the South Park slam to heart (bout time, Yeezy), by saying in his blog, in all CAPS (which I won’t do here):

[I need to] get past myself. I just want to be a doper person which starts with me not always telling people how dope I think I am.”

Well. There it is.

Head-scratcher: It took an idiotic, perverse cartoon to convince him that he’s a schmuck? And please, don’t post the Andy Kauffman “it’s all an act” theory. I will blast you. Too much evidence to the contrary. But again…some of his antics are borderline entertaining. Can you get through the following video (shot in Paris after he debuted his Louis Vuitton-inspired sneakers at a fashion show) without thinking “man on crack?”

Heh. Silly, but not surprising, coming from a guy who says his only regret is not being able to watch himself perform live.

Kanye, baby — there’s gotta be a way. Keep working on it.