The doctor called me just as Mavis and I pulled into the school parking lot yesterday afternoon. He gave me the final analysis on all Michael’s lab work, and confirmed that he tested negative for the mutations that would render chemotherapy unnecessary at the get-go. Bummer, but it’s what was expected after the initial findings. Onward.

We report to Cleveland this Thursday at 8 a.m. to prepare for the gamma knife surgery. Here’s how it plays out:

After the gamma knife, he has a week to wait, then he begins chemo. I knew we’d be making a lot of trips to Cleveland, and many would take place after I go back to school. I wanted Michael to have a dependable car to take to his treatments in my absence, so Mavis and I went to Columbus and picked out a nice one for him. It brought a big, proud smile to his face, which made the all-day test drive/finagling session totally worth it: 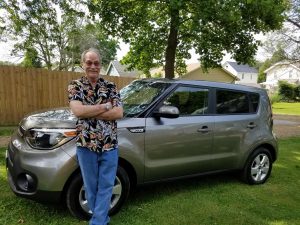 I’m sure it’s a relief to finally get some answers and a plan in place. My most-hated four-letter word is W-A-I-T. Go Team Thriller!! Sending love and healing energy!
PK

I know — it’s the absolute worst! But we’re relieved to have a plan now, yes. Thanks friend!

Thanks for the update Ms Fink! Will be praying Thursday for Michael and the best possible throughout the day!
Without ceasing my Dear Friend!

Thank you doll! Much love!

So glad for a plan! Larry’s friend had cancer throughout his body, with a poor prognosis, and he had gamma knife with excellent results. He’s now doing well. There is definitely hope for good results for Michael, also! ??

Thanks Jennifer – we’re hopeful this goes quickly so we can get on with the treatment plan. Great news about your friend – I’m pulling for the same result!

WooHoo – a road map forward and new wheels to take it all on! Congratulations! #teamthriller Extra prayers for Thursday and the days waiting (they are the longest)… <3 <3 <3

He loves to drive that little zippy thing! Thanks Darice – I’ll keep you posted!

Thanks for the update. Glad that the next steps have been set. Praying for Thriller and you each step of the way. Nice car for him! You done good!

Thanks pal! We’re looking forward to getting the chemo going now.

My heart goes out to you all.
We went thru the same thing with Uncle Fred. He had the gamma knife surgery also
My thoughts and prayers are with you and Michael.
If you need anything at all, please don’t hesitate to call.
I’m here if you need me. Hugs and kisses to you both.

Thanks, Aunt Deb — I know you guys have been through this before. Our hope was to come out for a visit this summer, but that’s on hold for a bit. Hugs to you, Carol, Janet and Tina — our Crazy Aunts! Much love!

So glad to hear there is a plan in place and all is moving forward. The Harvey’s will continue to pray for both you and Michael. Love and hugs to all! ?

Not meant to be a question mark…. I guess it didn’t like my heart emoji!

Thank you Robin! We will pay all this forward someday. <3

Glad to hear there is a forward moving plan! Hugs and prayers from Shelby!

Hey you both know I am sending every possible positive energy I can from here. I can’t even imagine what you two are going through but you will do this together! The support from your family sounds awesome, you are very lucky indeed!

What kind of Stargate car is that??

Now that’s a name I haven’t heard in a while!!!

I know we’re super fortunate to have a close-knit family around us. And it’s just as special to have a dear friend across the Atlantic who cares so much, too. I love you!

It’s a great plan and a great start! You know that we are always praying for you and Thriller. We will be right there with you both through it all. I know that Thriller will come through the gamma just fine. He’d better – he still has to take me for a ride in his new ride! We love you both!

Praying all goes well with all the treatments. I am happy to hear you finally have a plan in place. As someone who is also walking that long road i know how hard it is to wait for things to progress. Keeping you all in my prayers.

Hey, I thought about you the other day when I was at school. How are you doing? Are your treatments ongoing, or are you through the worst? I know you know about the waiting! Thanks for the prayers, Deb — you have ours as well.

I have 4 more chemo treatments left. If all goes as planned my pump will come off for the last time the day school starts. Still have reversal surgery scheduled for mid Oct. Hope to come back to work after Christmas break. I still need to deal with the thyroid cancer but that will be a walk in the park…or so the Dr tells me. Keeping you all in my prayers

Prayers continue as you finally have a plan. ??

Don’t know how my heart turned into question marks

I’m following your updates! I’m glad a plan has been established. Michael looks good standing next to that new car. I wish we were closer to ya’s cause i would sure like to help. Please keep the updates coming and know that we love you both. God Bless! Prayers always.

We love you too, sis! I had planned a day trip to IN — maybe with Mavis in tow — to see you, but those plans are on the back burner for now. Still planning it though! Hugs

He’s so blessed to have you. Thank you for the update. Praying daily.

Aw, thanks Connie. And thanks also for praying! We are humbled and so appreciative of caring people during this time. We will pay this forward.

I’ve been reading your updates and thinking about you and Michael, praying that today goes well. He could not have a more supportive, funny and loving person by his side! You’re a gift! Prayers and good wishes to you.

Thanks for reading and for especially letting me know you’re “here,” Annette! We appreciate the prayers and positive energy we’re receiving from people like you. So glad we reconnected after all these years, fellow Grammie!