LeBron, LeBron, LeBron. Once again, “King James” (hork) makes the news here in northern Ohio, and not for what he does at Quicken Loans Arena. Last year, he showed up at an Indians playoff game against New York wearing a Yankees ball cap. He was booed. He didn’t care. 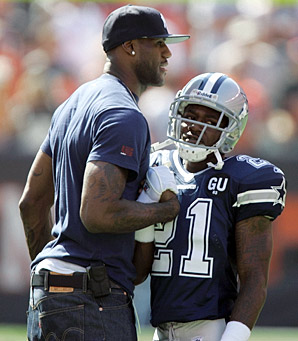 Then, last Sunday, to add insult to injury (yes, I know the Browns suck, shut up), he stood on the Dallas Cowboys sideline at Browns Stadium and hugged Jimmy Johnson and Terrell Owens, and schmoozed with the team in full view of Browns players (and honked off fans). More booing, followed by more not caring.

He’s been called the “next Michael Jordan,” or even better. Well, wait a minute, pard. In all the years I watched Jordan play with the Bulls, never once did I see him show up at a Bears game wearing a Packers hat, or at a Cubs or White Sox game in a Dodgers jersey. (Didn’t he even play for the White Sox for a season or two? Can’t remember.) I didn’t know what his favorite team was, and it didn’t seem to matter; I don’t think he would have flaunted his awesomeness in such a classless way, regardless of  his personal preferences.

So, while it’s completely within LeBron’s rights to flaunt whatever it is he flaunts, don’t put him in the same category with Jordan. I’m sure James figures he does enough for the city of Cleveland by giving them exciting games to watch, and by putting his name on a foundation or two, so yay, he’s awesomely awesome and let’s get over it.

Hey LeBron…how about a foundation for doctoral students in need of help with their tuition? Now there’s a cause, gosh dangit.

But regarding the hat-sporting and Cowboy-hugging…it’s not a huge deal. I mean, money can’t buy class or personal discretion, and truthfully, just because he’s from Akron doesn’t mean he has to follow Cleveland football and baseball. If he wants to act like a dumb kid, I say rock on. Let him play out his contract, then good riddance to him. Could the rumors about his going to New York or New Jersey be all hype? It remains to be seen. Like the man says, the Benjamins will be the final deciding factor.

Hey, man. Lebron is no more guilty than the thousands that live well behind Ohio’s borders and root for the University of Meatchicken. If I were a guy like him and I had the chance to be on the sidelines of a game with huge stars like that, I’d do it in a heart beat. I think he’s just drawn to the whole “America’s Team” concept that surrounds both the Cowboys and Yankees. I don’t see him rooting for the Texans, Jets, Giants, or Mets. I guess when you have that much money you can smile all the way to… Read more »

Ok, so you’d do it in a heartbeat, but for what purpose? To leech some creamy goodness from famous people, to “network” with the high and mighty, or to cheese off your hometown fans by being a dou**e? I say His Royal Hind-Endedness does it for C. Anything else, I got no problem with.