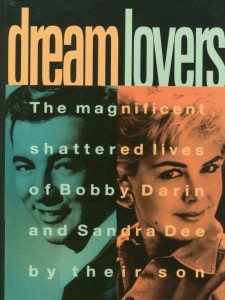 Over the last couple of weeks, I’ve been trying to get through the story of the singer Bobby Darin — of Splish Splash, Dream Lover, Queen of the Hop (my personal favorite), Beyond the Sea and Mack the Knife fame — and his stormy, doomed marriage to teen star Sandra Dee (of the Gidget and Tammy movies, among others).

After seeing the rather creepish biopic Beyond the Sea, starring a far-too-old Kevin Spacey as Darin (but it was Spacey’s own project, and reportedly Darin was his idol), I was curious about their relationship. Their son, Dodd, wrote the painful tribute back in 1994, a decade before his mother’s death. Darin died way too young, only making it to his 37th birthday before succumbing to a congenital heart disorder.

The most striking and tragic thread is how unbelievably unprepared Sandy was for adult life. Playing much older girls in film, and therefore giving the public the impression she was older, the 16-year-old married Darin — eight years her senior — in 1960. Soon after, Dodd Mitchell Darin was born. Up until she met Bobby on a film set, Sandra was completely controlled and sheltered by her mother. She’d never made a decision on her own. She didn’t know how to make a cup of coffee for herself, or navigate her way around a city. Bobby, on the other hand, was raised Brooklyn-poor (born Walden Robert Cassotto), but grew up pampered and spoiled because of his constant illnesses.

The story around who his mother really was would blow anyone’s mind. Make ’em cuckoo. So you can imagine the dysfunction when these two souls were thrown together.

So sad. If I had time this morning, I’d delve deeper into other revelations (such as Bobby’s unrivaled cruelty to some of his fans — the very people who put him at the top of the charts and paid to see his movies), but…I must be going. Faculty meeting this morning, yay.

Grab this book if you like bios — it’s a head shaker.

Sounds like a good one. I went on the IMDB site, and the page on her says she was born in 1942, so she would have been 18 in 1960. There are also several photos that are marked “Circa 1956” that show a fully-grown woman (she would have been only 14!!), so I’m not sure how accurate these things are.

Anyway I’m going to see if this book is available on Nook.

PK
Off to see the Wizard, and beat him with a broomstick.

Wow, that is some divergent info! I could have sworn Dodd says in the book that she was 16 when she married him. Maybe I read that somewhere else…

Oh thank you — now I shall have to go back and find the reference. And this is a “real” book — here I go, page by page.

I think you’ll like it. And be nice to the Wiz, sis.