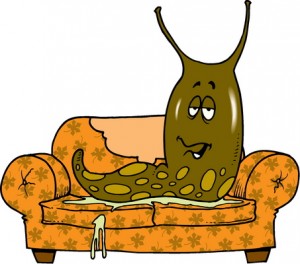 Don’t you hate going back to work after a holiday/long weekend? Man, was it rough to drag it out of bed yesterday. I felt like a total slug. (Here, of course, is where all the pensioners in Finkville chime in and say, “What? Drag it out of bed? What is this ‘drag it out of bed’ of which you speak?” Why, I oughta…

I slinked everywhere. You know, like in the old cartoons when a person would turn completely flat and slide down a staircase like a piece of human carpet? That.

However, now that the first few rehearsals are out of the way, I feel somewhat more energized. After the 4th night of being at school from 7 a.m. until 8:30 p.m., the old routine is starting to kick in, and I’m not as exhausted this morning as I was after the last late rehearsal. It’s all coming back to me now…

I hope your Tuesday was good — did you cook out? We did not. We ran and drove and erranded and had some fun and worked. Not enough grandson time, though. Hopefully, we can fix that in the coming weeks.

But the biggest “deal” of the last 24 hours is that I did not bring any work home. None. I think it’s time I learned how to leave some of school at school. I might be a bit further behind, but so far, I feel no ill effects.