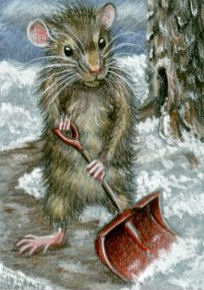 …because that’s about all you’d want to drive this morning around these parts.

“We were out checking the roads at 5 a.m. and some roads, such as Baseline, had 3 feet of snow,” Howard said. Ohio 162 was completely drifted shut until crews from the Ohio Department of Transportation plowed it. Portions of Old State Road had drifts as high as 3 feet. “You’ll drive along sections of the road that seem fine, and then you’ll come up on a drift that is 3 feet high. I expect this Level 3 to be in effect for some time,” he said. “We’re supposed to get more snow, and winds are expected to increase.”

During a Level, 3, motorists can be ticketed for being on the roadways.

Don’t have to tell me twice. Today is a day for cooking for the week, doing some choreography, and relaxing. May as well, right? Neither of us wants to plow out the 6 inches of snow that’s covering the driveway. Besides, it’s Saturday, and hopefully that means R&R for you as well. Fortunately, the Thriller and I have a near-empty dance card. Because, you know, there needs to be open space for coughing.