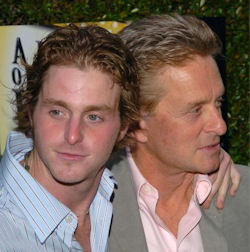 I read this morning that Michael Douglas’s son, Cameron, is blaming his many problems on the lousy job his dad did bringing him up. Folks need to be careful with that kind of accusation.

Everyone reading this can think of a person or persons who had a sucky upbringing, but still managed to avoid becoming felons. They somehow side-stepped selling crystal meth, using cocaine and heroin, beating their spouses and children, or squandering what many would call a life of extraordinary financial privilege. I know many people like this, as a matter of fact.

The cynics among us would say that Cameron’s lawyers are just trying to get him the easiest sentence possible, which amounts to basically doing their jobs as defense attorneys. But in doing so, it always seems to come back to the perp being portrayed as a victim. It’s a pervasive, almost inescapable concept in American courts. Why? Because it works.

When did everything change? As a teacher, I see it every day: people going to astonishing lengths to avoid personal responsibility or extra work (or work at all). I’m not so naïve as to think it never happened in my childhood, or that I never tried it myself. But in my day, it was usually confined to student machinations. Now it’s the parents who are doing all the wheeling and dealing, while the kid stands behind them, basically going “Neener, you can’t touch me because my dad’s here.”

I know there are still parents out there who teach their children about accountability. It just seems that the parents who don’t are the ones getting all the press — and as we all know, the squeaky wheel, the constant dripping of water against a rock…

So did Michael Douglas make his son sell drugs? Is felonious behavior directly related to crappy parenting? I say no. Not in most cases, anyway. The triumph of the human spirit over adversity is a scenario played out millions of times all over the world every day. Does its apparent breakdown in certain individuals equal entitlement to not paying the consequences of one’s actions?

Hmmm. The Fink thinks. What say you, fiends?

Amen and amen! I agree wholeheartedly with the Fink. I wonder how much of this is related to the whole “self-esteem” emphasis going to seed.

I second that emotion….

Well spoken. I definitely believe that our environment largely shapes us in our minds and hearts. In fact, you and I have had that conversation many times, as I recall! I just wouldn’t blame my parents/environment for my deliberate, methodical and repetitive gesture of securing methamphetamines to sell from my luxury apartment in New York is all I’m saying.

I’ve said it before and I’ll say it again…. kids don’t do what you SAY – they do what you DO. If you yammer on and on about the hazards of smoking, it goes in one ear and out the other if you’ve got a Marlboro hanging from your lips. The entitlement attitude in kids today directly mirrors that of their parents – we’re going on two or maybe even three generations of this. Makes me ill.