A cop in Los Angeles was recently convicted of staging fake raids of people’s houses. He’d go in, brandish his badge and gun, and “raid” the house for contraband. What he ended up doing was basically robbing people.

What did he get for doing this 40 times?

102 years. That’s one hundred two years. In jail. They’re calling it a form of armed robbery. Ok, I get the charge. I can see spending time in jail for it, too. It was a rotten, horrible stunt to pull on innocent people, scaring them to death and all. But here’s the thing…

Nobody died. Nobody was even physically injured. That doesn’t make what he did right – I’ll give you that and a cookie. So what’s my point?

Ray Lewis is my point. 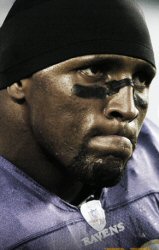 Oh wait…he didn’t get a jail term. Where’s the justice here? A cop gets 100 years for playing SWAT commando, and Ray gets nothing for killing a guy? (You may refer to a previous rant on this subject, if you’re so inclined.)

I know, I know. It’s all about corroborating evidence. That still doesn’t make it right. Sometimes our justice system backfires, and criminals go free. Yeah, I know all that. But it depends on your definition of “sometimes.” I think “sometimes” translates to “too friggin’ often” — especially where professional athletes are concerned.

PS – Here’s the original article about the ex-cop who will never see his family again.

Have I mentioned that this country’s going straight to the devil?