Having written a book myself, during which time my editor slashed over 10,000 words and red-lined my prose left and right, I thought there could never be an editor who would let slide any grammar that was less than perfect — especially when the book is printed by a major publishing house. 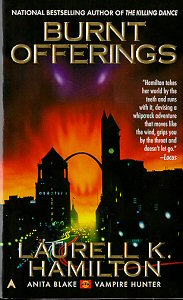 Right now, Mavis and I are reading the Anita Blake series by Laurell K. Hamilton (come on, a girl’s got to have some reading material that does not involve research methodologies). I love all things vampiric; always have, ever since picking up Interview With the Vampire after seeing the movie back in the 90s. Her stories are great, and there’s always an unexpected deus ex machina moment, designed to assure the reader that the stories will continue. Total fun.

Anyway, while reading the first book, Guilty Pleasures, I noticed a couple of errors. You know, minor things, like transposed letters or a missing word in a sentence. I thought, that’s all right, just a typo. No problem.

However, with each successive book in the series, the mistakes began to pile up. Things like “I was loosing the battle,” and “He was smarter then that,” started to irritate me — a lot.

Hamilton’s rampant use of alright is bothersome, too, although the word has been so overused that it’s now a basically accepted part of the American lexicon. Still, why wasn’t it caught and corrected? It makes the word nerd in me absolutely howl.

What does that mean? Of COURSE it’s a question. So, you’re asking a question, then telling the reader that you phrased the question as a question…STOP IT. I am going mental.

While I love the story lines, and Hamilton’s style is hip and smart-aleck, I can’t get past the myriad mistakes in usage and spelling, and her bewildering phraseology (not to mention an annoying penchant for committing paragraph after paragraph to describing what a character is wearing). Does that make me a bad person? I make this a question.

I went to LKH’s MySpace page the other day, and read that she doesn’t maintain it herself. But the site assures that she does read it. It also unfortunately says that Laurell “definately is enjoying MySpace.” Arg. More points off. Her own website — laurellkhamilton.org — is equally amateurish. **FAIL.**

Who knows…maybe Penguin Books thinks people who buy mass-market paperbacks won’t know the diff. But if I were a #1 New York Times Bestseller List author, I’d for dang sure make certain that everything going out to the public under my name was at least grammatically correct.

Hey Laurell — fire your editor and HIRE THE FINK!