Yay for cable cars! It was a blast. We took the guy’s advice and showed up around 7:15 to ride, and he was right — there was absolutely no one there.

We got bundled up (parts of the cars are open-air, and it was like 52 degrees outside) and hoofed the three blocks to Hyde Street. Two cable cars were sitting idle, with the four operators (one conductor and one brakeman each) sitting around, chatting. One guy pointed at a car and said, “Hop in!” 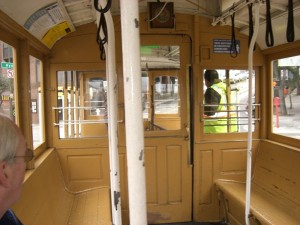 We decided to ride in the enclosed part on the trip out, then move to the open part on the way back. One thing’s for sure: these things have to have dependable brakes. 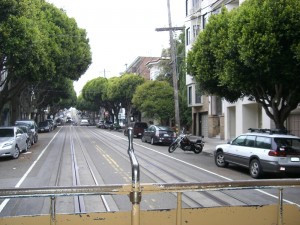 On the return route — dangit I forgot to transfer over the photo of them manually turning around the cable car to reverse its direction — we sat in the open part in the front, so I could have a clear shot of taking on the hills: 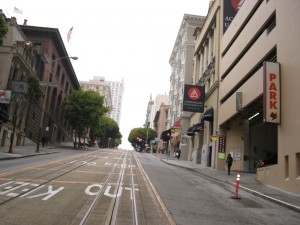 We collected about 5,000 passengers on the way, all in various stages of precarious hanging on and invading the personal space of others. It was great. On the return trip, we struck up a conversation with a guy hanging off the side. (It was the only thing to do, really, as my knees were jammed into his groin area. We were already intimate.) He was super nice — raised in the area and now works in SF. He shared a couple of great stories, and pointed out the nearby real estate sign in front of a small apartment that was going for $590,000.

He suggested getting off at Lombard Street, so we did. One small part of Lombard is known as “The Crookedest Street in the World”…. 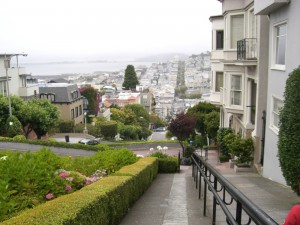 …but it should also win at least a small award for The Steepest.” 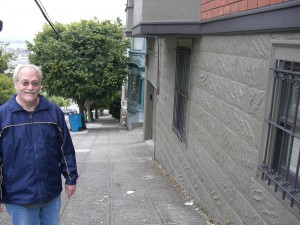 Have you ever noticed how walking downhill can be as hard on the legs as walking up? After a half mile of that steep grade, I was walking on columns of jiggly Jello for the rest of the day. No joke. I am old and out of shape.

After the cable cars and checkout, we headed for Fresno. We arrived a little early at the Best Western, and had 30 minutes or so while our room was prepared, so we hit the Fresno Donut across the street. Yikes…I’ll save that story for another time, when I can quote the Thriller’s account verbatim. You will laugh. Suffice it to say that it was a one-time experience. HA

After checking in (twice, because our first room had plumbing problems — at least we only had to schlep everything next door), we took off for Kings Canyon and Sequoia National Forest. Wow, what a thrill. Photos just don’t do it justice. At least mine didn’t, so I’ll give you a couple from the SNP site and Wikipedia: 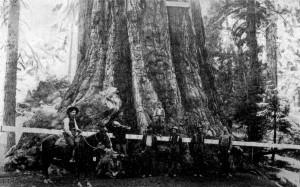 The signage at the park says that the General Grant Tree is the “third largest tree in the world.” Well I just found out it is now the second largest, after the General Sherman Tree at Sequoia National Park, because the Washington Tree — formerly in second place — lost a big part of its top in 2005. NPS needs to get current after six years, methinks.

So it was a fantastic day of walking and experiencing. Couldn’t have asked for more. We were worn to a nub by the time we collapsed for the night. We’re rewarding ourselves with two leisurely days in Las Vegas, where we will spend (lose) our money very carefully.