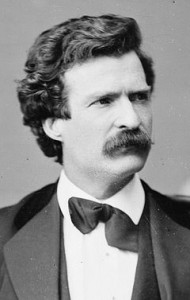 Outside of the compulsory book or two I read in school, I am largely ignorant of much of Mark Twain’s work. That must change.

Last night, after all the work was done and the Thriller went downstairs to read, I hit the sofa and channel-surfed. I came upon the last segment of Ken Burns’s Twain biopic on PBS. I was really surprised.

We generally tend to think of Twain as a sage; an American literary papa whose humor and talent for spinning yarns enchanted the world — and I do mean the world, as he toured extensively around the globe, giving talks and reading from his novels. But what I didn’t know was the freak show of guilt and personal tragedy that made up most of his adult life.

An inventor, he spent lots of time with the likes of Nikola Tesla and Thomas Edison. He invested heavily in a contraption called the compositor, designed to make newsprinting more efficient. He actually staked a great deal of his wife’s personal fortune on its development, but it failed miserably, and his family lost nearly everything. It was for this reason that Twain embarked on his world speaking tour. He needed to recoup $200,000 in debts and save his beloved wife and daughters from the embarrassment personal bankruptcy would cause.

It was decided that his daughter and wife would go with him, but other daughter Susie would stay home. Susie fell ill while the others were in England, so Twain’s wife and daughter sailed home to take care of her. They were no strangers to losing a child, as they had lost a son years before. It was during that journey home that Susie died. Livvy (Twain’s wife) found out about it when she reached the States, and Twain himself was unable to attend the funeral services. Thus began the downward spiral into depression and loss.

Not long after, his wife died, which pretty much sealed the deal for him. Robbed of his soul mate and two of his children, he sank into despair and was, understandably, never the same. Never really happy again. How tragic.

I learned that his ambitious novel, A (Connecticut) Yankee in King Arthur’s Court, is an encapsulated representation of his own life. It starts out lighthearted and optimistic, and ends darkly. I must buy that today for my Nook.

It’s a fear that lives in the back of many minds, I’m sure: outliving all your loved ones. My grandmother Johnson lived to see her husband, sister, mother, father, and worst of all, all three of her sons, die. All the more reason to enjoy your family every day. Tell them you love them. Don’t lose touch.

Next week I am going to visit my cousin Glenn, who lives near Dallas. I haven’t seen him in probably 35 years. Perhaps we can talk about Mark Twain.