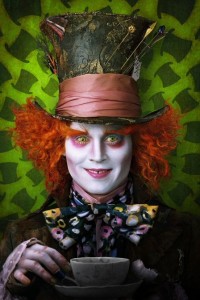 1. Fantastic pictures from Tim Burton’s Alice in Wonderland came out three weeks ago (I must have missed it; just saw them for the first time at the Grand Theater in Lincoln on Monday). JD looks appropriately and delightfully creepy as the Mad Hatter (photo is clicky).

But does anyone see a resemblance, however fleeting, to this? Gotta say, it bothers me. Must be the teeth.

2. I have to learn to not let some things bother me so much.

3. I am glad to be home. Last night, the Thriller & I had some KFC and watched the Indians actually win a game.

4. PK sent me a link to a list of eight dumbest apps for the iPhone. Only a matter of time before BlackBerry earns a similar article. Actually, RIM would probably have more apps available to poke fun at if they didn’t extort their potential contributors. (Apple charges half of what RIM asks for, and the RIM stakes are higher — and dumber.)

5. Didn’t sleep well; much work to do today regardless. Blah.

6. Anyone see the new Potter film yet? What did you think?

Gotta git. It’s Finkday and there is much on the plate. Have a goody!

Did you guys have the new grilled KFC? (I know that sort of defeats the purpose of the F in KFC….but…) I wanna party with you!! I’m thinking I may run out & get the cow toss and the hair clinic apps – I about fell off my chair reading & laughing at all of those! Any sign of your MacBook yet?? B to the oomR ReplyRat Fink Reply:July 17th, 2009 at 12:35 pmAren’t they funny? And yes, I did have the KGC! I love it. I haven’t been to school to see if my new toy has arrived. All… Read more »

I went to a midnight showing of Half-Blood Prince and loved it. I thought it was the best yet – but it also deviated from the original plot the most.

I enjoyed Harry Potter. It does suffer from the same problem as the book it’s based on (existing mainly to set up the one that follows it) but Daniel Radcliffe shows himself for being the awesome actor that he is. Makes me wish that the Bilbo Baggins rumors are true.

As for JD, yeah, he’s kinda creepy looking. Not quite as creepy as Helena Bonham Carter as The Red Queen but still sufficiently creepy.