OK, call me crazy. Go ahead. But consider this, from the “Gee, Do You Think We’re All Stupid?” Department: Mia Farrow has said that her 25-year-old son, Ronan, “might be” the son of Frank Sinatra, and not Woody Allen. Hmmm. Ya think? How about now? Whaddya think now? Mmm-hm. Even Ronan himself said in his now-famous tweet, “Listen, we’re all possibly Frank Sinatra’s son.” Haha. I’ve been reading about the whole Woody Allen’s daughter/abuse fiasco; it’s heartbreaking, and I won’t give it space here, but holy cow…

Then there’s this d*******g. I was bullied in school. People called me “Shorty” when I was young, and I cried about it to my mom. Seriously, I totally see how that’s analagous to fearing for your very life when you go to school, simply because you’re different and there are evil, heartless idiots who delight in watching you suffer, over and over and over. I mean it; I’m not a violent person, but this guy needs a beatdown, and it should start, at the very least, with him being tossed out of the coaching job he’s up for. Tool.

Dude, what’s wrong with coming up with an unorthodox strategy to win on Jeopardy!? People can’t stand it because this guy jumps around and tries to hog the Daily Doubles so his opponents can’t cash in on them. And this is bad because…?

Adorable dog photos from under my desk, which is where Remy likes to hang out while I’m typing at the box: 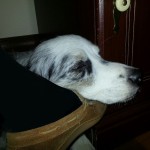 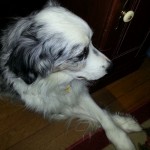 Rousseau used to do that crossed-paws thing.

Adorable grandkid photos, when they were getting changed for bed: 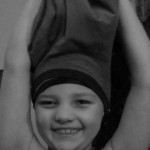 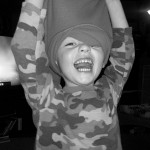 I look at these pictures (and those of my other two adorable grandsons) and I wonder why I ever complain about mundane, stupid things. We all win the lottery with these little people — and their parents.

Happy Super Boo Day — I’m going for Denver, because it’s good for me. Because I need to just get over it.

But I guarantee nothing.