Because I know my fiend Stoney will love it.

I will resist the temptation to post certain photographs of certain people, brought to mind by the word “clown.” That wouldn’t be nice, or ladylike. It would be like, I dunno, calling Lil Kim a tramp.

I read a funny/snarky political blog this morning on the LA Times site. In it was a picture of Massachusetts senator John Kerry with this character that got me thinking about clowns again. (This particular part of the post was poking fun at the clown, not Kerry.)

There must be a secret history of clowns that I don’t know. Hmmm. Well now, back after ten minutes. It seems there is quite the storied … um… story. To save you from researching this yourself, I will deposit all the pertinent information you might require directly into this space, because I heart you and I want to be your personal philomath.

According to clown-ministry.com, you got your three basic types of clown:

While they have varying origins, it is assumed that the whiteface clown is the oldest, descended from the medieval court jester. Interesting aside: while court jesters probably did not wear white makeup, later clowns (variations on actors of the day) did so in order to illuminate their faces in poorly-lit performance halls.

But I still wonder — why are clowns considered funny? And to whom? Certainly not to me. And I don’t know about you, but these guys don’t strike me as people I’d want my children following around. An “Army of Clowns?” No thanks. They all look like they just got off the chain gang. (Sorry, I know — stereotype. Sue me.) 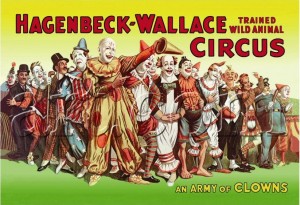 I shake and shudder as I read this post and look at the creepy clown pictures.

I too find clown antics unfunny and would like to know who deemed these…these. . .macabre creatures FUNNY and required to appear at every festival, carnival and amusement park ever built to scare little children to the point of screaming, crying and peeing!

And who invented clown school?

I always kinda like Bozo the clown. But I think it was more my fascination with his hair and how he got it to boing out like that.

But yeah, add me to the list of people who find clowns creepy. And that’s why “It” scared the bejeesus out of me.

Fog here, too… I’m off to get a McBreakfast Burito…

You know, I’ve thought about this for quite a while actually. Perhaps clowns are funny in the same manner in which Shakespear wrote comedy. Somebody still dies, but they do so in some light-hearted manner. If I am not mistaken, the hobo clown has a lot to do with racial slurs and what not. Archie Bunker would go out with his buddies, their faces painted black with frowns, and do an obviously racist comedy routine on some episodes of All In The Family. Clowns, much like magicians, also provide people with a possible escape from their own lives. (This goes… Read more »