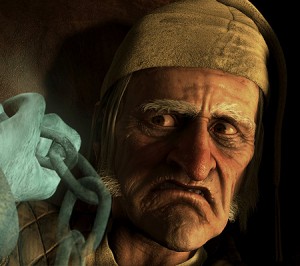 Kay and I went to Mansfield last night and saw Robert Zemeckis’s A Christmas Carol. Truth be told, I wasn’t overly thrilled about going; it was to have been the umpteenth retelling I’ve seen, and I was cold and a bit tired, and I had my concert (tonight) on the brain, and those blasted 3-D glasses anyhow…

Boy, was I glad we went! It was a delight. You can hardly match anyone’s CG appearance with their voices (with the exception of Gary Oldman, who plays Bob Cratchet, and Bob Hoskins as Fezziwig). I saw almost no likeness to Jim Carrey in Scrooge’s character at all. Kinda bugged me because I really tried to find some. It ended up not being an issue, though. The movie was nothing grand or groundbreaking; it was just a great way to spend a couple of hours with a friend. Very entertaining.

The fly-action shots reminded me of the Back to the Future attraction at Universal Studios in Orlando. My guess is they closed the ride long ago, but if you ever had the chance to go on it, you know it was a huge thrill. And effects like watching the snow fall were fun — you could almost reach out and touch it. Of course, the message of the story is timeless and true (life isn’t about the things you amass, but the love you give away), so there was no reality grappling or paradigm shifting involved. Just a nice night out with a friend before three days of insanity starts.

And since the insanity starts in about 2.5 hours, I’d better get the move on. Come to the high school choir concert tonight, 7 p.m. Good times to be had. Bando, break a leg on your concert as well. Looking forward to some serious Panera time with you over break.

Happy Monday — if there is a such an animal.