Last night was movie night with Bob and Kay, and we rented this rather “interesting” Francis Ford Coppola project. 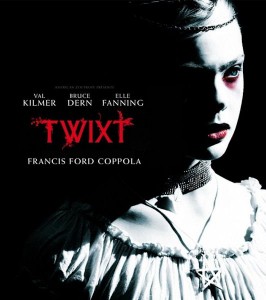 What, never heard of it? Yeah, me neither.

This film could almost be considered a satire on (or tribute to? I have no idea) every low-budget, straight-to-video B-movie ever made. I don’t know, maybe that was Coppola’s intent, but even at that, it was bizarre. From the opening lines by narrator Tom Waits (using a spooky voice and channeling the whole it was a dark and stormy night vibe), to the absolutely clichéd-beyond-clichéd characters, to the scenes of the protagonist walking through a foggy woods to a haunted hotel in the middle of nowhere in the middle of the night, you know you’re in for a long 90 minutes. And heaps of raspberries on Coppola’s capo for the screenplay, which rips off every line from every cheesy groanfest you’ve ever endured.

The description hails it as a “terrifying horror film.” As someone who usually refuses to watch horror movies (I get too scared, and I hate the infuriating, ubiquitous “jump-out-and-BOO!” device), I was not even close to creeped out. Not even remotely ooky one single time. 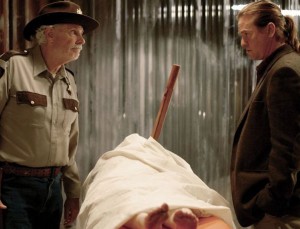 Pretty much the look on their faces for the entire film

That said, there are some amusing parts. Val Kilmer and Bruce Dern, who must have either A) wanted to do a film — any film — for Coppola, or B) needed a quick paycheck, were entertaining in spots. The scene (likely improvised) where Kilmer does several impressions of other actors while trying to come up with an opening for his new novel is funny. And Dern is, well, Dern: eccentric and loud, with a bit of psychotic thrown in, constantly referring to himself in the third person. And for those who are fond of cinematography, you’ll like some of the scenes with respect to color and vantage point.

Still, it was a stinker, unless you and your friends wanted to entertain each other with snide running commentary, which we did.

Not once were we inclined to care about any of the characters — not even for the grieving, guilt-stricken father who’d lost his daughter in a boating accident due to his own negligence. 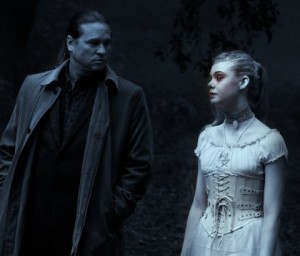 Actually, we rented it because a friend of ours had a small part in it. (Lisa Biales plays the clerk at the soda fountain and at the haunted hotel. She also plays guitar and sings in it; what you hear is really her voice and playing.) At least now I can say I’ve seen her in it, and that’s pretty much the best thing I can find to say about it.

I thought about giving it two cheeses, you know, for its comedic value — but the “squint your eyes and shake your head” value trumped all.

On the Rat-O-Meter scale of five cheeses, I give Twixt:

I think I’ll pass. Can’t wait to read your review on The Conjuring! :P~~