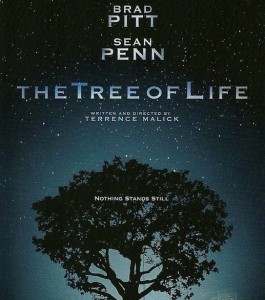 I’ve deleted several sentences right out of the gate this morning. Talking about this film is like spooning up mercury, or herding cats. First, let me tell you what type of movie this is not:

Au contraire, mon frère. This movie takes work. With a 2.5-hour runtime — some scenes going as long as 10 minutes with no dialogue — and a seriously convoluted plot presentation, one has to pay attention. Bigtime.

Amidst back-and-forth scenes from the late 1950s to the present day, we’re shown the troubled life of a man named Jack (Sean Penn), who, while now in his mid-50s, still struggles to reconcile the death of his brother (we’re led to believe during the Viet Nam War) at age 19. Through Malick’s eyes, we see Jack’s choices in life as a comparison to the ins and outs of basic survival from the beginnings of time.

No, really — he shows us stuff from the beginnings of time:  a dinosaur conflict (one dinosaur emerges from a thicket to find another on the shoreline, wounded and unable to defend itself), exploding nebulae, the dawn of the universe, a giant asteroid hitting Earth, the seas forming, prehistoric ocean creatures…he runs the gamut. For a while (during the first extended period of wordless scenes), I thought I was watching a tribute to 2001: A Space Odyssey. Kubrick-like images like this, this and this took over the screen for lengths of time that seemed to push the edge of what the average moviegoer would tolerate. After a while, I became a bit suspicious. Was this going to be one of those pretentious outings by a reeeeeally serious director who just likes to hear himself talk about abstract concepts? Is it one of those movies that’s so weird, people will automatically ooh and ahh and call it art and nominate it for Best Picture? It also won the Cannes Film Festival’s top honor, by the way.

Fortunately, the acting of Brad Pitt saved me from jumping to that conclusion. As Jack’s strict, inventor father, Pitt gathers the pieces together for us. Tragically frustrated (he chose, out of necessity, to be an engineer rather than pursue his love of music), Pitt delivers the perfect picture of a man so driven by his failures, he is determined beyond all else to see that his sons don’t repeat history. The effect on his eldest son (Penn) is profound and long-lasting — as things like this usually are.

So after all these words, I’m still not to the core of the thing. And as it’s 5:54 and I’m running out of time, I won’t get there today. Suffice it to say that if you watch this film, open up your mind and forsake all preconceived notions of storytelling. Enjoy the stellar performances by Brad Pitt and Jessica Chastain, and let other chips fall where they may.

On the Rat-O-Meter scale of five cheeses, I give The Tree of Life:

3 thoughts on “Review: The Tree of Life”