First: If you’re going to psychoanalyze this show, or point out its occasional (OK, habitual) stretches with regard to realism, or if you’re going to snark on about how it’s basically historically inaccurate with regard to the role of cable news and competition and ratings share, or Aaron Sorkin’s dreamland interpretation of Committed, Serious People Doing the News for the Greater Good, then maybe you shouldn’t watch it. 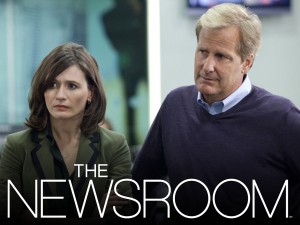 However, if you want some gosh dang great acting, and kick-arse, awesome rapid-fire dialogue in a series that makes you wonder where the heck the last hour went — you should definitely watch The Newsroom (Sundays, 10 p.m. on HBO). The opening scene was among the most enjoyable five minutes I’ve ever witnessed on TV.

The lead character, cynical news anchor Will McAvoy (Jeff Daniels, in a curmudgeonly, crusty role that will hopefully make everyone on earth forget Dumb and Dumber forever), sits on a panel discussion at Northwestern University, and the moderator — clearly becoming frustrated with McAvoy’s non-answers — goads him into answering an uncomfortable question, which launches him into an absolutely delicious rant (warning: profanity).

Who cares if the last 90 seconds were a bit pie-in-the-sky (um, going to war for “moral” reasons??)? It was great theater, and I loved it. I was entertained. See, that’s the problem sometimes: people inexplicably confuse entertainment with real-world thinking. Now I’m all for realistic renderings of current events, and truthfully, Sorkin doesn’t quite deliver the goods. For instance, the show focuses on the day of the Gulf Coast oil rig explosion. Supposedly, every other network was calling it a search-and-rescue mission, while only the dynamic, greenhorn twenty-somethings in McAvoy’s newsroom saw the real environmental consequences, and ran with it on-air to produce a truly compelling, dramatic newscast. But hey, I forgive them that. Why? Because it’s great television. That, and I’m not a pretentious schmuck who whines when I’m not intellectually edified by an hour of play-acting. Hello.

The only trouble I have with the suspension of disbelief is Sorkin’s choice for the young, irresistible romantic female for whose affections men are seemingly willing to throw down. Allison Pill is a fine actor, and does the confused-but-intelligent intern thing really well, but...gorgeous? Not so much. That’s a little thing, though. I know I’m not pretentious, but let’s not ruin it by instead being shallow.

Still, it was totally enjoyable, and I’m not kidding when I tell you I looked at the clock and could not believe it was 10:55 already. For some, the show will seem like a kind of amalgam; a case of House meets The Network. To me, that’s part of its charm. It’s a keeper in my book.

On the Rat-O-Meter scale of five cheeses, I give The Newsroom:

Oh, you’re so good to us that you don’t even realize! Right now, we’re stuck shifting between True Blood (on Mondays) then alternating between the show “Merlin” and starting from scratch with “24”, which I never watched much of until the 7th or 8th season. Also, in 20-minute intervals, we started from scratch with Tosh.0, for humor. Among the shows we’ve started from scratch, they include The Practice, The Shield, Boston Legal, MadMen, Nurse Jackie… etc. Jeff has gone through Weeds and The Wire while I have my precious West Wing. Fantasies aside, I love me some Aaron Sorkin. Don’t… Read more »