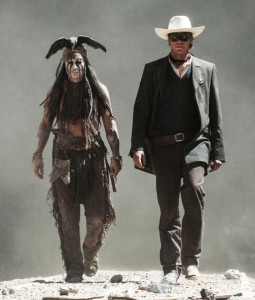 Knowing about the scary reviews and sagging box office numbers, we went to see The Lone Ranger on Sunday afternoon anyway, because 1) we often like films that the easily bored, pretentious movie critic hates, and 2) I can’t break my streak of seeing every film Johnny Depp makes.

Bottom line: sorry, but we liked it! Again, as I always say, it’s what you expect that often determines what you get. If you expect little (which we did, thanks to the overall pan of the film), you may be surprised.

Those who go to the film expecting a brave, all-powerful, stilted, noble and in-control masked man easily dispatching bad guys will be disappointed. Everything is taken down a notch in this version, mostly for the sake of comedy. It’s a buddy movie. Think of Nolte/Murphy, Chan/Tucker, Gibson/Glover — then forget them. This is not like those, mostly because there isn’t really a time when their humanity stops the pace of the film and gives the audience a reminder that the characters are, in fact, human. Also, the “buddies” are decidedly not friends, nor do they grow to be so.

Still, the story does not disappoint. Wacky, contrived and utterly impossible? Sure! Have we not seen anything like that in American cinema before? Come on, critics. Much of the acrimony written about this film centers on Depp’s insistence on playing characters with quirky, overriding physical and mental flaws. I hear what they’re saying; even I grow weary of the famous Depp confused smirk. But that in no way means he does not bring depth to his work. His portrayal of Tonto as both a middle-aged and an old man (the story is shot in flashback) is never boring, albeit somewhat unsurprising in places.

There are a couple of little eye-rolling chuckle lines that you have to pay attention in order to catch. I caught one — a total aside — spoken by John Reid (Armie Hammer in the title role), as the pair were on a mountain ridge, riding away from the camera: Do you know what “Tonto” means in Spanish? Haha.

Near the end of the film, Reid, in a moment of jubilant inspiration atop his beautiful white horse, shouts, Hi-oh SILVER…away! Cut to the familiar deadpan Depp replying in all seriousness, Never do that again.

I’ve read adjectives like bloated, overlong, silly, stupid, bland, boring. While I get that, I totally didn’t feel insulted by this film, or that my time or money was wasted. We laughed, we were entertained. I guess that’s why I’ll never be a movie critic; apparently, I can enjoy something less deep than Terrence Malick. What’s wrong with a predictable romp once in awhile? I ask you.

The Depp faithful will be satisfied, and Hammer is cute. There is a fair amount of violence, and some rough language.

It was a fun afternoon out, and the Thriller and I splurged and shared a popcorn. Shoo-ee! How ’bout a walk on the wild side.

On the Rat-O-Meter scale of five cheeses, I give The Lone Ranger:

3 thoughts on “Review: The Lone Ranger”