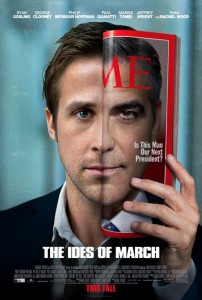 Intrigue, suspense, betrayal, revenge: all in a day’s work in the political world. But it was done with great flourish in The Ides of March.

I’m not a great George Clooney fan (except of his face); nor do I think Ryan Gosling or Evan Rachel Wood are actors I’d count among Hollywood’s “beautiful people.” In fact, their faces kind of bother me. (Does that make me a bad person?) Still, they gave what I thought were honest and completely believable performances. And Clooney wasn’t really the star; that job fell to Gosling, playing a hard-working assistant presidential campaign manager who truly believes in the cause of the candidate (Clooney).

Early on, Gosling is told by a New York Times reporter/friend, “Don’t believe in politicians. They will eventually let you down.” He vehemently disagreed. He shouldn’t have.

Political films sometimes drag, but this one slaps your face at every corner. And I haven’t even gotten to the best part yet: Philip Seymour Hoffman and Paul Giamatti, playing rival campaign managers. They can steal a scene by simply walking in and looking around the room. I make it a point to see every movie they’re in. Flawless.

Much of the film leaves you wondering what’s going to happen next. You end up in a constant state of analysis — coming up with “if/thens” and “I’ll bets.” When the final intent is at last revealed, it’s a whole new game, but you’re not sure if you want to root for the same people or not. Uncertainty, curiosity, commiseration, pulling for the underdog:  all in Clooney’s plan to string you along to the end.

Speaking of the end…it could have used some work, in my opinion. I think George settled for the tried-and-true as opposed to the let’s-kick-’em-in-the-gut-then-roll-credits approach. Still and all, a great Friday night treat. And the (very smart) inclusion of Giamatti and Hoffman in the cast was a most excellent bonus.

On the Rat-O-Meter scale of five cheeses, I give The Ides of March:

3 thoughts on “Review: The Ides of March”