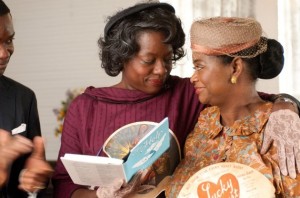 BFF Kay and I went to see The Help yesterday, and I can tell you one thing for sure: do not leave home without a box of Kleenex. Another thing, as with all movies: you need to suspend a little disbelief.

This engaging, “you go, girl!” story takes place in Jackson, Mississippi, during the very beginnings of the Civil Rights Movement. It was the norm for wealthy white folk to have black maids who not only cooked and cleaned, but nannied (and in many cases, actually reared) their children — children who spent their childhood years loving and growing quite attached to the maids, but who grew up to treat the women like slaves.

The script was harsh at times. You can’t have a period film about racism and that not be the case. Yet, as I think back on the movie, there were A) attempts to downplay what likely took place back then, and B) overblown stereotypes, designed to sway the audience. I know, that sounds overgeneralized. Here are some for instances:

However, there’s a bright side, and it’s a big one.

The performances by the primary and secondary leads were a delight. No one misfired or failed to deliver. With the highest of highs and rock-bottom lows, this film rates 100% on the emotion scale. Kay and I were both alternately giggling like teenagers or bawling like fools. Some mother-daughter scenes between lead character Skeeter and her mom, played nicely by Allison Janney, hit particularly close to home. Oh, and it was great to see Cicely Tyson on film again.

There is no doubt that this is a woman’s empowerment movie. There’s not a single male lead (and it was fun to see Lafayette from True Blood playing a nice guy!). Many times, films with heavy female dominance tend to stick it to men. Not this one. Women are the heroes and the villains in this story, and all are played well, if not a bit over the top. A bit. The story is a smidgen slow in places (almost two and a half hours runtime), but totally satisfying. The writers and actors did their jobs: we both bawled on cue.

Oh, and a confession: During a scene where Skeeter sits at a typewriter and corrects a mistake, I leaned over to Kay and said, “No way they had Liquid Paper back in 1964.” Thought I caught them in an anachronism. Alas, I was wrong.

Still, it was a fantastic story, well acted. It was easy to cheer at the end — and you don’t hear people applauding at the end of a movie very often anymore. That was nice, too. Go see it.

On the Rat-O-Meter scale of five cheeses, I give The Help:

4 thoughts on “Review: The Help”