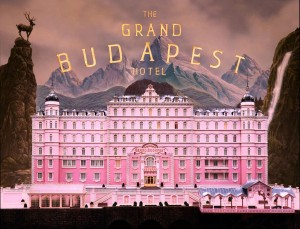 Some films are hard work, even if they’re great; you really have to put in overtime to hang onto the story, or care about certain characters, or achieve some manner of closure at the end. The Grand Budapest Hotel isn’t one of those movies.

If you’re a fan of Wes Anderson, this one is a shoo-in. I’ve come to the point where I don’t even need to see the credits roll– I just know it’s an Anderson film. Why? There are several reasons, all having to do with color, patterns, quirky locations, whimsical suspension of disbelief (where you know it’s impossible, but you’re enchanted by it anyway because the director makes no effort to mask its improbability with zippy special effects), and stories and characters that are ever-so-slightly off. This is why I like Wes Anderson films.

However, a treatise on what makes a movie “Wes Andersony” is better left to those who know his work more intimately. Back to Budapest. 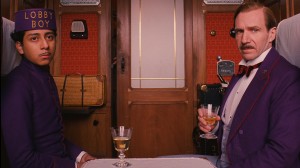 As with many Anderson stories, the tale takes place completely in the past — the 1930s in this case, between the major European wars — in a made-up Bavarian country. Ralph Fiennes is brilliant as the hotel concierge who befriends and mentors a shy, awkward, yet exceptionally intelligent lobby boy, with whom he eventually shares a crazy adventure involving art theft, murder, a prison escape, and a beyond-silly alpine ski/toboggan chase filmed in obvious miniature (which, of course, makes it all the more enjoyable). Fiennes’s performance in this film could stand as the singular reason to watch it; he will be forever linked to that role, as Gene Hackman is to his part in The Royal Tenenbaums. Spectacular, and fun to watch. If he isn’t nominated for a Best Actor Oscar come January, I’ll be disappointed. 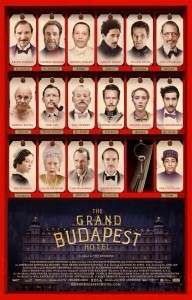 And speaking of actors, Anderson uses the standard horses in his stable of performers, who would all probably do the gig for free just to work with him. Among the usual suspects: Owen Wilson, Bill Murray, Tom Wilkinson, Tilda Swinton, and others. To some, this might seem tedious, but to me, it’s a familiar, comfy blanket of knowing what to expect.

One thing, though…through no fault of his own, the wonderful F. Murray Abraham, around whose character the movie centers, spoke in a tone so exactly like his role as Antonio Salieri in Amadeus, I couldn’t separate the two. It was as if at any moment, I expected to hear him speaking Italian. Weird.

The ending was the perfect mixture of nostalgia, satisfaction and sadness, with a huge nod to the sanctity of family and enjoying what life gives you, and treasuring the memory of what it takes away.

If you liked Moonrise Kingdom, The Life Aquatic with Steve Zissou, and The Royal Tenenbaums, you’ll like this film even more.

On the Rat-O-Meter scale of five cheeses, I give The Grand Budapest Hotel: