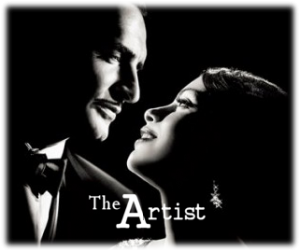 Y’know…if you’re not smiling, bawling, or at least thinking there is a Santa Claus after this movie, then you likely don’t have a soul.

Shot entirely in black and white and as a true silent film, you need to pay attention from the get-go. Yes, this is one of those movies in which you have to participate in order to grab the story. However, there aren’t many dialogue slides — most of the tale is meant to draw in the viewer by reading faces and lips (the latter of which was surprisingly easy on many occasions).

Set in 1928, at the end of the silent film era, movie star George Valentin — played beautifully and with suave grace by French actor Jean Dujardin — finds himself without prospects as the “talkies” gain popularity, forcing him to “make way for the young.”

Enter Peppy Miller, the gorgeous and talented ingenue, who first meets George when she plays an extra in one of his films, then catapults to stardom in the talkies while George looks on in despair. The plot centers around the careers and personal issues of these two characters, with John Goodman perfectly type-cast as a gruff film exec, and the awesome James Cromwell playing George’s ever-faithful chauffeur, Clifton.

With beautiful effects — even for black and white and almost no spoken dialogue — and over-the-top (as it must be) acting by all characters, it is no surprise that this film won over Academy voters (it won Best Picture last year). It’s not a “tribute to the silent era” movie. It’s a story about being down and out and clawing your way back. It’s a story that invites you to care…and that’s huge with me when I watch a movie.

Not sure why it got the PG-13 rating, other than maybe the scene where one of the characters uses a pistol to attempt suicide. Otherwise, it’s a complete treat for watching with your parents or in mixed company. No foul words, no jiggle parts. Just story and beauty.

On the Rat-O-Meter scale of five cheeses, I give The Artist:

Happy Sumday, fiends. I’m off to rehearsal…yes, they’re that awful.