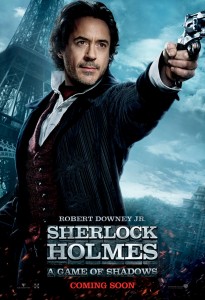 This one took the bromance cake. Of course, I’m one of those shallow girlz who will gladly watch — and on some level, enjoy — anything Robert Downey, Jr. is in, so it wouldn’t matter what cake was up for the taking. I’d like it.

Still, there were holes. I know about the expectation that a viewer suspend disbelief and instead just immerse him/herself in the story. I get that. But Guy Ritchie makes the work awfully challenging. Just a few examples:

The fight scenes (too many for my taste) bordered on the useless. And the evil henchman/assassin working for Moriarty? Hardly a scary individual. He looked like a cost accountant, late for a train. (My apologies to all tardy cost accountants.) It just didn’t add up; it was like Ritchie was trying to cover all bases for everyone, and missing the mark altogether in places. The way Holmes was directed to react to the death of someone close to him (and it wasn’t even confirmed in the movie, at least to my satisfaction) was pretty shallow. Big question mark there.

There were definite bright spots, however. I mean, it’s RDJ — need I say more?

Still, it was a borderline fun movie for a quiet Saturday night. If you don’t mind being nibbled to death by anachronistic ducks, give it a try. “Sherly” is, after all, pretty easy on the eyes.

On the Rat-O-Meter scale of five cheeses, I give Sherlock Holmes: A Game of Shadows:

16 thoughts on “Review: Sherlock Holmes: A Game of Shadows”