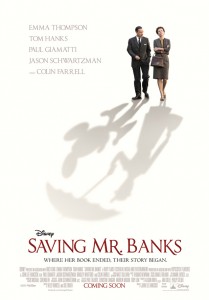 The movie theater was crowded yesterday afternoon when Kay and I went to see the latest Disney movie, Saving Mr. Banks. But it didn’t matter. Regardless of how many of us were stuffed in that room, I’d have still come away totally pleased with this beautiful, poignant — and at times, powerful — story.

Yes, yes, insert here the obligatory snappy snark from the hip-to-hate-Disney naysayers. Did we bawl? Absolutely! Did it tug at the heart at all the right moments? Of course. I still have no idea what’s wrong with that. I swear, my fuse gets shorter by the year with prissy, pretentious critics who wouldn’t be caught dead putting a stamp of approval on anything remotely formulaic — especially when the formula features Disney’s stamp. Into the trash heap with them, anyhow.

As you probably know, the story chronicles the culmination of a 20-year quest by Walt Disney to persuade the irrepressibly demanding Pamela L. Travers (played perfectly by Emma Thompson) to relinquish the rights to her Mary Poppins book series so Disney could make the film. What develops is an oddly endearing friendship between two larger-than-life people who were, in their individual ways, chained to — and driven by — formidable childhood memories.

The story, as the title suggests, centers around the realization by Disney that Mary Poppins came not to save the young Banks children, but to save their father — Travers’s father by extension in this case, played by the always-dreamy Colin Farrell in beautifully acted flashback scenes. 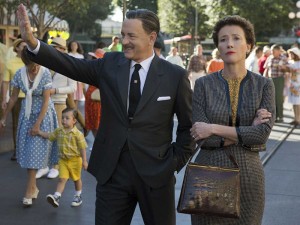 While delving into the reasons why the authoress is so dead-set against releasing the rights to her stories (and in effect, her father, who was a beautiful dreamer with a gargantuan drinking problem), Disney himself comes to a point of self-discovery regarding his own past. It’s all smoothly done, and before you know it, you’re swept up into the emotional drive towards the end you know is coming. It was all irresistible, and we loved it.

Paul Giamatti, one of my all-time favorite actors, was beyond sweet as the Disney employee assigned to drive Mrs. Travers around Los Angeles on her visit. The scenes with Disney artist Don DaGradi (Bradley Whitford of West Wing fame) and the fantastically talented songwriting team of Robert and Dick Sherman were especially funny. The fact that the finicky Travers insisted that all their brainstorming sessions be tape-recorded is surpassed in coolness only by the fact that the tapes still exist in the Disney archives. What a treat it was to hear her actual voice during the credits.

You’ll laugh, you’ll cry — it’ll be better than Cats. (But what isn’t?) Yes, you should expect the standard Disney feel-good aspects; they abound, for sure. And of course, the Disney franchise comes off looking pretty squeaky clean; any identifiable “weaknesses” manifest mostly in Travers’s character and not Disney’s. Even with these predictable turns, however, the storytelling is believable, and the visual experience is top-notch.

The only shame is that the Oscar nominating committee completely skipped over this project (with one exception: Thomas Newman is nominated for his original film score). No matter, though. Good films are made all the time, and many are snubbed by the Academy. For my money, it was a lovely afternoon of forgetting about the upcoming stresses of the work week for both Kay and me — and I’ll bet it would do the same for you. It’s an enchanting story, delightfully told.

On the Rat-O-Meter scale of five cheeses, I give Saving Mr. Banks :

Well written, I too laughed, cried, and sat in awe of this very powerful movie. I too was sat that the Oscar nominating committee totally didn’t get it.

What an amazing movie about the making of a movie I dearly love.

Hey, thanks for your snappy, well written review. We have talked about seeing it. You have encouraged us to take that step.

What a nice review.

Will have to see it soon.

Wait………. did you say Bradley Whitford?! Every time someone from West Wing falls into another show or movie, Heffe goes “UH HUH!”… like that’s the only reason I wanted to watch something else. It was all a West Wing-Watching Plot!

You didn’t mention Tom Hanks specifically. Or does it just go without saying that he is good?

I’ll add this one to the looooooooong list of movies I hope to see one day.

Very nicely written review, Bird! I was also curious about Hanks. Did he also make the movie memorable? I’ve heard so many wonderful comments on Emma’s performance. Sometimes I wonder about how the Oscars are picked. Is it the powers -that-be who make the decision, or the people who go to the movies? Hmm. Anyway, thanks for the wonderful bit. In my opinion, you should win an Oscar for “Best Commentary”!

I agree with Mavis…great review, Siskel nor Ebert have/had anything on you!

Was not sure I wanted to see the movie but will give it a shot because of this review and of course Emma (she has always been my celebrity crush).

Aw, well thank you, fiends! How nice of you all to say. <3 Please do go and see it! I know you’ll like it. And I did fail to mention Tom Hanks; he was his usual wonderful self as Walt Disney, although — and I almost hate to mention this because it’s silly — his inflections and facial expressions sometimes reminded me of G.H. Dorr, the creepy criminal he played in The Ladykillers. I haven’t seen much of Jason Schwartzman’s work (or the guy who played the other Sherman brother), but they were both great and fun to watch. And… Read more »

Whoa!! Thank you for the review! Doug and I don’t do movies very often but this one did interest me…Upon your review I think I’ll take the chance and go see it! Hopefully it’ll still be in theaters this weekend.

It should be, Candace. And you’re welcome — I think you will love it!

I am more than excited for this movie. History, Disney’s Mary Poppins, children’s literature – can’t get better than that(ish). Thanks for making it sound as good as I was hoping.

Let me know what you thought of it!