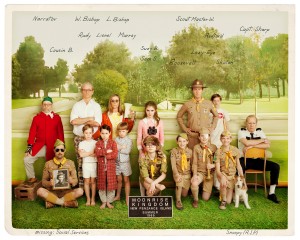 Just enough dysfunction to be interesting; just enough precociousness to be endearing; just enough fairy story to be completely enjoyable. Such was the recipe for Moonrise Kingdom, Wes Anderson’s (Rushmore, The Life Aquatic, The Royal Tenenbaums, The Darjeeling Limited) new film.

It’s 1964, and Suzy and Sam, two serious, intelligent, square-peg 12-year-olds, have gone missing on a New England island called New Penzance, having run away from their unhappy lives in order to get married. Suzy, the daughter of two estranged, dysphoric lawyers escapes into the jungle-like recesses of the island with foster child Sam, who gathers a bunch of camping supplies and deserts his fellow Khaki Scouts to make a life in the wild with his new lady. 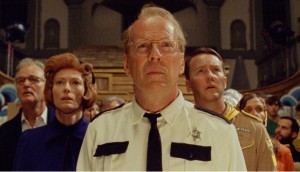 Understandably, this causes the scoutmaster (Edward Norton) and the girl’s parents (Bill Murray and Frances McDormand) a great deal of panic, and the search is on. Led by the bumbling and gentle-spirited police chief Captain Sharp (Bruce Willis, in a refreshing departure from his standard tough-guy roles), they all set out to find the kids.

As is Anderson’s signature style, the characters are all slightly…how do you say…off. Quirky. Not quite in control of their situations, but likable enough for you to want them to be. The child actors are perfect: deadpan and serious and totally effective — yet entertaining, in a Macaulay Culkin/Home Alone kind of way. And as my awesome fiend and Finkite Tom Hanks pointed out, no words are wasted. (We agreed the same about Aaron Sorkin, by the way.) Every line means something; there are no fillers. 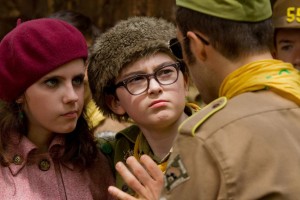 This wasn’t a silly story with a happy ending. This was a silly story with a happy ending where you walk out of the theater just a bit ennobled, and maybe a little nostalgic for your own private reasons. It was OK that Suzy’s parents were still struggling in their marriage, or that we really don’t know what happened with Captain Stark’s previous unrequited love relationship. In other words, nothing about the ending — while it was satisfying and basically hopeful — smacked of contrived, predictable Hollywood drivel. While the characters were not well-rounded (not by a longshot), they were well-portrayed. That alone earns it another half a cheese.

Of course, the best part of the afternoon was picking TH’s awesome cinematic brain about filmmaking and what he looks for in a movie. Not only is seeing films with him fun, it’s educational. I always learn something new after talking with him.

So. First off, if you’re a Wes Anderson fan, this will be an instant favorite. If you’re not, or if you have little patience for not-quite-balanced people trying to deal with life in outrageous situations, you may want to take a pass. I’m somewhere in the middle, and I loved it. And Bill Murray was great.

On the Rat-O-Meter scale of five cheeses, I give Moonrise Kingdom: