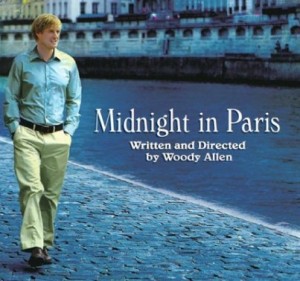 I’m about halfway through my list of 2012 Oscar nominees for Best Picture. So far, I’ve seen Hugo, Moneyball (which I didn’t have time to review, bummer), The Help, The Tree of Life, and as of last night, Midnight in Paris.

I must say I think I’ve found my favorite of them all thus far. It’s a touching story of painful yet meaningful growth, with the city of Paris as the real star.

The plot: Hollywood screenwriter Gil Pender (Owen Wilson) visits Paris with his future in-laws and his fiancée Inez (Rachel McAdams, in a decidedly unlikable role). Easy going and affable, Gil “goes along” with whatever activities Inez chooses for them (including outings with a pretentious American scholar, played brilliantly by the very Welsh Michael Sheen), but he appears preoccupied as he wrestles with what is to be his very first novel. On a solitary walk through the city, the clock chimes midnight and a vintage limo pulls up. Its inhabitants invite him in, and he accepts. Off he goes — to Paris in the 1920s — where he meets some real-life bohemians: F. Scott Fitzgerald, Ernest Hemingway, Pablo Picasso, Gertrude Stein, Salvador Dali, Cole Porter, and a sad, mysterious girl named Adriana. In the morning, he returns to the present day, only to repeat the journey the following night.

The comedy is sincere and affecting, as is most of Woody Allen’s work. But what hooked me was the gradual, visual change Wilson’s character experiences through his contact each night with people who accepted him readily into their circle — when the man himself was seemingly unable to find welcome into his own future family’s world.

Filmed almost entirely on location, the photography was beautiful, capturing the nostalgia and simple allure of the cafes of post-WWI Paris. The soundtrack was out of this world — if it wasn’t handpicked by Allen himself, I’ll eat my hat. A delightful story — perfect for a night on the sofa while the Thriller was at class. The Academy did well to nominate it. I doubt it has a snowball’s chance of winning, but it should.

On the Rat-O-Meter scale of five cheeses, I give Midnight in Paris:

6 thoughts on “Review: Midnight in Paris”