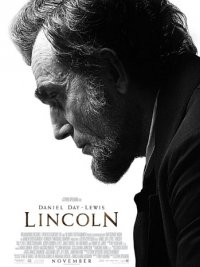 It’s taken me a couple of days to really formulate a somewhat articulate way to write my review of this film. Several descriptors come to mind: personal, dense, reflective, funny, human, tortured, honest, unpretentious. I could write a single (and longish) post on each one of those adjectives with regard to this movie. You just have to see it for yourself to arrive at your own set of descriptive words.

Let’s start with the most obvious. Daniel Day-Lewis looks like Lincoln. Oh my, a dead ringer if there ever was one. In fact, all the whiskery men in the cast are coiffed to the absolute nth degree; it’s fabulous. And Mary Lincoln, played tragically and exquisitely by Sally Field (at first, I thought, “She’s too old for that role; icky!” And then it was once again proved why I’m a music teacher and others are brilliant directors with a keen eye for casting), was picture-perfect in her wide, antebellum gowns and beefed-up shoulder and back fat. No stone was left unturned. OK, I’m gushing idiomatic here; on with it.

You won’t see a lot of Civil War battles. In fact, I can’t remember a single mention of Gettysburg. At the first scene, I thought, Uh-oh…soldiers dying horrific deaths on a rain-soaked field. Looks just like Saving Private Ryan. But I was wrong, wrong, wrong. The entire film centers around two main themes: 1) the passage of the 13th Amendment to the US Constitution, abolishing slavery, and 2) the clandestine workings behind a failed effort by Lincoln to negotiate peace with the Confederate States. It is plain to see the inherent dichotomy here; in fact, Lincoln was told straight-up by William Seward, “You can have this peace with the Rebels or this Amendment; you cannot have both.” 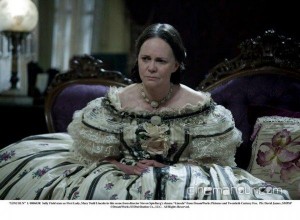 It doesn’t matter if you know the outcome here; it’s how it all happened that leaves you amazed. Even more amazing was the captivating speeches — and they are long and long — by Lewis. No, fiends — this is not just another biographical look at Lincoln’s life. This is the struggle behind the struggle: a tale of a larger-than-life leader in the only time in this country’s history when Americans fought Americans. There’s also a crucial side-story about a doting (yet flawed) father, a husband desperate to hang onto what is left of his wife’s sanity, and a president who believed to the exclusion of all else that if the US didn’t abolish slavery, all were doomed.

All of that makes it a movie you must see. If I had a four-and-seven-eighths cheese graphic for it, I’d use it. It’s as close to perfection in a film as I’ve ever seen. (But if I give it five cheeses, I’d have nowhere to go, you see.)

I could write another thousand words on the film, too, but alas, I must grade papers now if I’m to be done in time for the Js’ arrival at dinnertime tonight. Yay! I love Thanksgiving break.

On the Rat-O-Meter scale of five cheeses, I give Lincoln:

That’s two awesome films I’ve seen this month. Now you get out there and do the same.