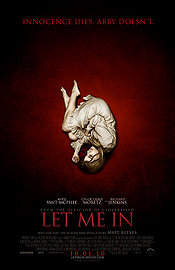 As many of you know, I am not a fan of horror films. The reasons vary, but allow me to quote myself on a post from back in October:

And I won’t even go into the “Ghost Train” nightmare at Riverview [long-ago amusement park in Chicago], where the train ride stalls in a pitch-black tunnel and all manner of scary creatures — played by real people — emerge from the walls, reaching and grabbing. All this at seven years old…no wonder I’m a flippin nutcake.

That said, Let Me In (a surprisingly recent remake of the 2008 Swedish film Let the Right One In) was a refreshing diversion from the dichotomous vampire tales of today (romantic/brooding, and rip-heads-off gory). In other words, a great deal of the most graphic violence is suggested; you don’t see as much of the makeup and CG gore as you might expect. There’s actually a story here, about a lonely, bullied middle school aged boy who befriends the strange girl who moves into the apartment next door with her guardian.

Sometimes slow, other times predictable (I mean, how many shocking plot twists can there be?), the movie gives ample time to the relationship between the two children, and how strikingly similar their lives are, in light of their other obvious differences. The ending is a bit stark, but satisfying enough. And of course, the little thugs who relentlessly torment young Owen get some fun treatment as well.

I’d say if you’re looking for a vampire film that will allow you to go upstairs in the dark afterwards, this is a good choice. It had enough emotional story to hold my interest, and enough fang to keep the Thriller from retiring to his office to work on a research paper.

On the Rat-O-Meter scale of five cheeses, I give Let Me In: