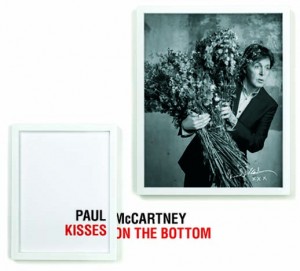 The Thriller surprised me yesterday by bringing home Paul McCartney’s new album. Wow! He’s the greatest (the Thriller, I mean — well, Paul too, but…)

Silly pun in the title notwithstanding*, this is a serious project. Lots of pop/rock singers do it at some point in their careers: make an album of standards. These are, according to the liner notes, many of the songs McCartney grew up listening to and singing along with at what he calls “family sing-songs” during his youth. And, true to his longstanding reputation as a relentless showman and shrewd artist, he surrounded himself with major league heavy hitters: Eric Clapton, John Pizzarelli, Diana Krall, Stevie Wonder, and some amazing studio players. Light strings here and there for icing purposes, but otherwise it’s just Paul and a rhythm section. Good choice.

Cleveland-born Tommy LiPuma produced, adding to his impressive litany of Grammy-winning home runs from the likes of Miles Davis, Barbra Streisand, Diana Krall, Natalie Cole and George Benson. Sounds like a shoo-in for at least a nomination at the end of the year. So here’s my take, after listening to it twice. 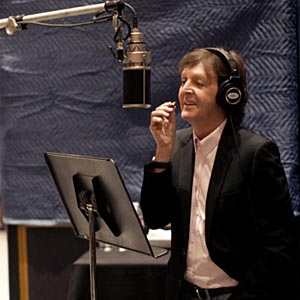 Let’s get this said: Paul is no jazz singer, and he’s a marginal crooner. Therefore, a couple of the songs just didn’t work. As flawlessly produced as the record is, you still can’t escape a poor musical fit, and those do happen. “More I Cannot Wish You” and “Always” are forgettable. “Paper Moon” is also weak, but Paul’s somewhat clumsy vocals are rescued in fine style by the band, featuring amazing violinist/singer Andy Stein (listen to him here on his own album, doing “Fit as a Fiddle”).

One song in particular, however, lets Paul be Paul. Listening to the bluesy track, “Get Yourself Another Fool,” I found myself thinking, “Ah, here’s the voice we all know and love.” The reserve and control employed throughout the other songs dissipates here, and we get more of a Wings feel. Not “Oh, Darlin'” by any means, but he seems to loosen his necktie just a bit.

So, it’s a careful recording (in his defense, he admits to feeling intimidated by all the jazz players and singers in the studio), but a pleasant listen and a fantastic effort, considering the guy will be 70 years old this June and is still touring and going at it like his hair’s on fire.

OK, what’s up for you this weekend? I did another Comfort Foodie post last night — wow, delicioso. Tonight, we have the Js, and tomorrow is movie-and-dinner-date time with the Thriller. Monday? The Grease rehearsal schedule officially begins. Here we go…

*While it’s hard to believe McCartney didn’t foresee the snickering it would cause, the punny album title does make sense. The opening track, “I’m Gonna Sit Right Down and Write Myself a Letter,” references finishing a love note by drawing “kisses on the bottom.”

2 thoughts on “Review: Kisses on the Bottom”