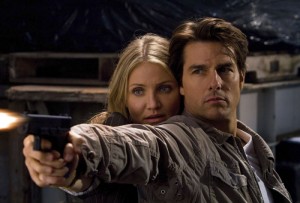 Yesterday, the Thriller and I took off to Mansfield to catch a matinee and do some pre-Odyssey shopping. Eclipse was our film of choice; it started at 11:00. Well, thanks to endless traffic jams due to heavy construction, we were late enough to have missed the first part of the movie. So, he says to me, “You go ahead and pick another one. I’ll watch whatever you want.”

On a whim, I chose Knight and Day, the new film with Tom Cruise and Cameron Diaz. What a hoot! A perfect movie for a carefree day. We both loved it.

I’m sad that half the critics at Rotten Tomatoes.com disliked it. No, it didn’t have any heavy or lofty themes, and no, it wasn’t about dastardly Americans destroying the earth and creating a dystopia that only helpless but politically and environmentally correct malcontents can fix. Rather, it’s a spy story with lots of great car chases and shoot-outs, accompanied by a good dose of mystery and silliness.

I think Tom Cruise is a wackjob in real life. But people, he is positively adorable in this movie, playing a rogue spy who goes against the “Agency.” His perfect foil is Cameron Diaz, a likable character with a small ditzy streak whom Cruise endeavors to protect. That’s where the comedy comes in. Diaz is an absolute spaz, flipping out regularly at the dizzyingly dangerous situations in which she finds herself, while Cruise shows total calm — indeed, he is the ultimate gentleman and perfect nice guy, calmly and kindly giving instructions to Diaz while the pair is bombarded by machine gun fire, or gently reassuring her as he sedates her for her safety.

It was funny and entertaining, and that’s all. If you won’t feel the need to assign national importance to its message, and you can find it within yourself to just enjoy a crazy romp, then you need to see this film. If you can’t, then maybe you could be a movie critic. Honestly, sometimes they’re just uptight goons.

On the Rat-O-Meter scale of five cheeses, I give the following to Knight and Day, simply on its entertainment merit:

2 thoughts on “Review: Knight and Day”