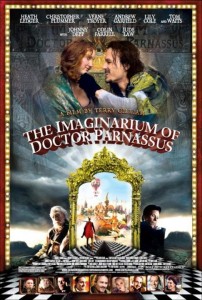 I have seen some strange films in my day. Some I’ve enjoyed, and others made me think, “Hm. That was two and a half hours I’ll never get back.”

But this one — The Imaginarium of Doctor Parnassus — takes a couple of cakes. Not only is it the weirdest movie I’ve seen in quite awhile, but its peculiarity (and huge requirement for the audience to suspend disbelief and accept profound anachronisms) ended up being what I actually liked most. I enjoyed this bit of odd from the mind of Terry Gilliam, who is no stranger to weird, having written the Python television series & films, Fear & Loathing in Las Vegas, Time Bandits, 12 Monkeys, and The Adventures of Baron von Munchausen.

Knowing precious little about the film before we watched it, we were a bit confused by the opening scene — When does this take place? What year? — not to mention the impossible physics of two horses drawing a skinny wagon built two stories high. And that’s just the first 30 seconds of the story.

The plot develops around a troupe of travelling vaudeville players, out of place and out of touch in modern-day London. The 1,000-year-old Dr. Parnassus (the ubiquitous Christopher Plummer — I still don’t see him as anyone but Captain Von Trapp) and his two gorgeous young assistants attempt to scrape together a living by showing bafflingly apathetic street audiences their wildest dreams come true, if only they’ll step into the doctor’s magic mirror.

Their fortunes turn for the better when they take on Tony, the Hanging Man, played wonderfully by Heath Ledger, in his last-ever role. (Gilliam is to be congratulated for deftly and almost seamlessly working in Johnny Depp, Jude Law and Colin Farrell to play Ledger’s character in subsequent scenes, filmed after Ledger’s death.) Things get really interesting when the Devil — played by Tom Waits, who unfortunately can only play bad guys — arrives.

The movie has a bizarre, dark, almost depressing feel — kind of like Tim Burton doing Lewis Carroll. (Oh, wait…) Little person Verne Troyer adds a rather misplaced comic presence, with his hard American accent and distinctly 21st-century delivery. But somehow, it all works.

I’d say if you haven’t seen it, try it. After the first 15 minutes or so, the story becomes easier to follow. And one of the characters turns out to be someone totally different than you thought at the beginning, so the predictability element is diminished.

Even the Thriller liked it, and he is often the first to poo-poo something that strikes him as pointless or predictable. I was impressed that he immediately saw something in the plot (involving a metal whistle) that I totally didn’t get.

Edit: Yipes! Forgot to close with my Rat-O-Meter rating. On the scale of one to five cheeses, I give Doctor Parnassus:

So, happy 4th of July to all my American fiends. *kA-BLaM*

Hey Finky!! I saw this one, too – it was one of the in-flight on demand videos from JAL on the way to the Philippines back in April. I SWORE that I would rent it on my return & watch it on the big screen @ home, but of course busy life got in the way. I’m with you – the imagination to cook up all the behind the mirror scenes just boggles my mind! I’m glad you liked it – I sure did! I had forgotten that this was the film Heath Ledger was working on when he passed,… Read more »