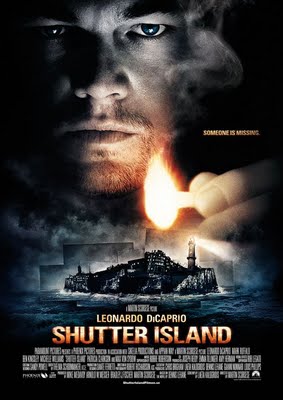 The Thriller and I retried the movie night thing, and this time, it worked. Only we didn’t finish Daybreakers or whatever it was called. Instead, we watched Shutter Island, starring Leo D.

If the final season of LOST taught me anything, it’s that some questions simply don’t have answers. This point will be driven home at the end of the movie. But that’s all I’ll say about that, lest I ruin it for those who have yet to see the film.

Here’s the plot summary from IMDB:

It’s 1954, and up-and-coming U.S. marshal Teddy Daniels is assigned to investigate the disappearance of a patient from Boston’s Shutter Island Ashecliffe Hospital. He’s been pushing for an assignment on the island for personal reasons, but before long he wonders whether he hasn’t been brought there as part of a twisted plot by hospital doctors whose radical treatments range from unethical to illegal to downright sinister. Teddy’s shrewd investigating skills soon provide a promising lead, but the hospital refuses him access to records he suspects would break the case wide open. As a hurricane cuts off communication with the mainland, more dangerous criminals “escape” in the confusion, and the puzzling, improbable clues multiply, Teddy begins to doubt everything – his memory, his partner, even his own sanity.

OK, suffice it to say that the above explains a whole lot of nothin’ — for a reason. Again, can’t go there.

Still, we both really enjoyed it. I enjoy Scorsese movies (Casino, Color of Money, Goodfellas, Gangs of New York, The Departed — all good ones, and can’t wait to see his George Harrison docu later this year). It’s worth watching a second time — maybe that nagging question was actually addressed, and both of us missed it.

On the Rat-O-Meter movie scale of five cheeses: