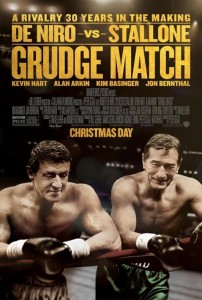 Two aging (aged? — De Niro is 70 and Stallone 67) boxers have a 30-year-old score to settle, and where better to put things to rights than in the ring, yes? Add into the mix a complicated past relationship (Kim Basinger, looking all awkward and basically unlikable with her potty mouth and constantly bewildered/angry facial expressions), a grown son and his 8-year-old boy (insert standard-issue, precocious, smiley-faced, sing-songy-voiced cherub with the vocabulary of a Harvard grad), and you have what most critics are calling a dismal failure.

But, as usual, what the cinesnobs pan, we generally enjoy. Ha. Go figure.

Maybe it’s because we’re “older” and these two actors were very much a part of our young adult lives. Rocky and The Deer Hunter were the first memories I have of these former box office giants. I still think they’re great, and maybe I channel too much of that nostalgia into my overall opinion of their more recent work, which, by many barometers in the business, has been labeled substandard. 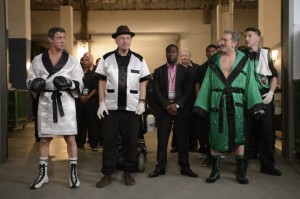 But hey — qui s’en soucie? Psh. We like what we like. So what if they should’ve hired Chris Rock to “do” himself onscreen, rather than the poor imitation floated by Kevin Hart? So what if you could have seen Alan Arkin playing the curmudgeonly old trainer with a heart of gold trick from a hundred miles away? So what if it was borderline creepy to watch two rather leathery, wrinkled dudes go at it in slo-mo in the boxing ring? (I always look away on the slow-motion punch shots…eww…)

Rocky Balboa and Jake LaMotta they weren’t, trust me. But the premise was kind of kitschy and throwback, you know? Like a private joke between them and those of us who remember going to the theater to see Rocky and Raging Bull back in ’76 and ’80, respectively. Both men retained part of their boyish charm, even if some of the obviously improvised patter in a few of the scenes seemed a bit forced.

Could have completely done without Kim Basinger, however. First, she struck me immediately as too young for the part she played (former lover of both men), even though she is only seven years younger than Stallone in real life. Second, her face rarely changed from appearing honked off or confused. Come on, people; show us at least one redeeming factor to make us want these two to end up together.

OK, enough snarking already. It was what many movies are designed/destined to be: a harmless romp with some laughs for an afternoon at the matinee. We liked it. Oh, and that guy from Walking Dead  is in it, too.

On the Rat-O-Meter scale of five cheeses, I give Grudge Match:

Having seen the usual trailers for this movie I ended up each time saying “I think I’ll wait for Pay-for-View.” My fear was that it would leave me grimacing…sort of like when we had to watch Mick Jaggers underarm skin flappin in the wind during The Stones Super Bowl halftime show in 2006. An icon looking really old under harsh fluorescent lights…simply too much. I think I’ll wait for Pay-for-View. p.s. I love your reviews! ReplyRat Fink Reply:January 1st, 2014 at 8:23 amHAaaaaa Underarm skin flappin’ — I know that feeling all too well. HAHA Totally hear ya. Sinatra comes… Read more »