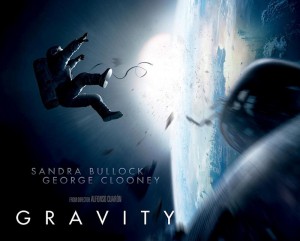 You can be sure I began this experience with zero expectations, given all the reservations I had at the outset:

So, I wasn’t expecting much at all. Imagine my delight at being pleasantly surprised.

“Pleasantly” is probably a bad word choice. There are very few pleasantries in this story. Clooney and Bullock play astronauts on a repair mission, when their shuttle (their ride home) is completely obliterated by flying space debris from an exploded satellite, leaving them stranded in the abyss, the sole survivors of an already-dangerous undertaking gone horribly wrong. They must make their way to the Chinese space station a hundred kilometers away if they are to have a snowball’s chance of making it back home alive.

Bullock is damaged goods, having lost her four-year-old daughter to a head injury. Clooney plays the heroic, country-music-lovin’ space cowboy to perfection. Their interactions, however borderline silly at times, don’t seem to stand in the way of the plot, which at *all* times, reeks of impending doom. Kudos to the producers, too, for casting Ed Harris as the voice of Mission Control in Houston. Well played.

SPOILER ALERT – DO NOT CLICK THE UPCOMING REVIEW LINK IF YOU DON’T WANT TO KNOW THE ENDING. 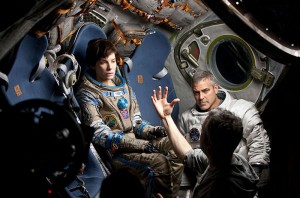 I like this picture because Clooney totally channels Buzz Lightyear.

There was some bad science, although there just about has to be, in every space movie. The Thriller and I almost simultaneously asked the question out loud, “How can they grab onto something going 17,000 MPH and hang on, when they’re obviously just floating about at orbit velocity?” We don’t know anything about astronomy, so maybe we’re mental on that score. But the folks at Bad Astronomy know all about it, and their (SPOILER!) review pointed out several interesting breakdowns that were, again, necessary in order to make the movie palatable for an audience, and indeed, worthy of an Oscar nomination for Best Picture.

Still and all, we were riveted from the get-go, and I can guarantee you won’t want to look away for one moment. The special effects guys alone should (and likely will) win an Oscar; the portrayal of depth and enormous expanse — even in a 2-D viewing — was magnificent, and often unsettling. Completely entertaining. That, to me, indicates a great movie experience, and beyond worth the $7 to rent it from the On Demand menu.

On the Rat-O-Meter scale of five cheeses, I give Gravity: